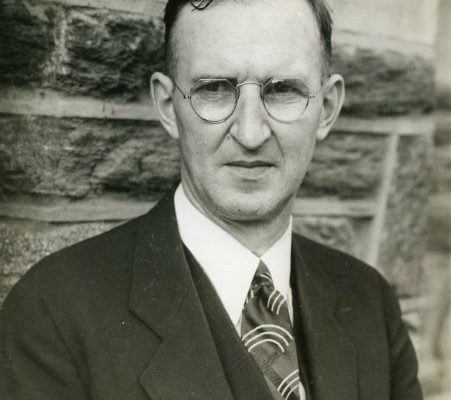 John DeWaard grew up in South Holland, Illinois. He attended school at Calvin College in Michigan and Princeton Theological Seminary in New Jersey.

In the 1920s, after graduating, he was called to pastor at First Presbyterian Church of Cedar Grove, Wisconsin. There, he carried on a fairly significant ministry before the trouble started.

One Saturday night, there was a knock on the door. It was one of the Sunday school teachers and she had some concerns about the Sunday school lesson that she was preparing to teach the children the next morning.

She had noticed that, in the material, they were treating Jesus as just a great man who was a good example, not as the Son of God.

He saw the problem that she was seeing and began seriously examining the educational material that was being published by the PCUSA.

He started to find evidences of theological liberalism, or modernism, running throughout the material and he took this very seriously. The more he learned, the more he found and the more troubled he became.

He realized that he had a decision to make. He could confront this and call these things into question or he could just close his eyes to it and be a good yes-man.

He decided to write a letter to the presbytery that he was a part of and lay out the questions he had, lay out the troubles he saw, and, basically, bring the problems out into the open.

He knew the implications of doing this, but, with his wife’s support and encouragement, he mailed the letter.

They both know that, if he did this, there would be a firestorm, but they were convinced that they needed to stand for the truth, whatever the cost was going to be to them personally.

When the presbytery received the letter, it did not make them happy. This began a whole sequence of events which led to his being disciplined, his being put out of that church, and their dissolving of the relationship between him as pastor and that congregation. They, basically, threw him out of the ministry because he had the courage to criticize some of their theological novelties.

He had come into the presbytery as a highly touted student, recommended by one of his professors, and had been heartily welcomed. People saw in him some real promise and some intellectual and theological gifts. He was also a good pastor and a good preacher.

None of this mattered, though, when he started asking questions and the presbytery had him silenced. They wanted men who would go with the flow and never say a word against the program.

The presbytery decided to send a representative to tell the congregation that DeWaard was no longer their pastor, but DeWaard knew what was coming. He got into the church and into the pulpit before the man got there.

The service started and he preached a scathing sermon against what had been going on. When he finished, he walked out the door with his wife and children.

About three hundred people stood up and walked out of the church with him. There were only twenty-five people left in the congregation when the representative went to make his announcement.

Basically, the whole congregation stood with their pastor against the tyranny of the presbytery.

Soon after, they got together and had a worship service. They determined to have a new church in Cedar Grove and purchased some property since the old building belonged to the presbytery; thus, Calvary Orthodox Presbyterian Church was born.

Catch the rest of this interview with Brian De Jonge on John DeWaard on VCY.tv