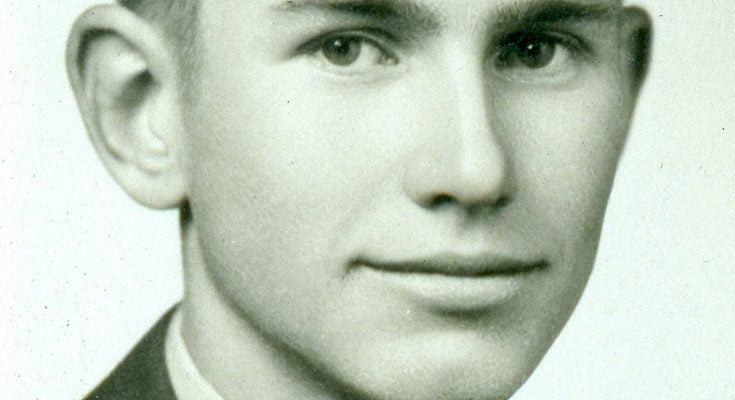 Today, we’re going to go back to the beginning and learn about the accident which led to him becoming a Christian.

One day, when he was seventeen, Ed Nelson, who grew up on a farm in Windsor, Colorado, was loading manure.

It was his first time using a new piece of equipment and he couldn’t sit down properly to drive the manure spreader. The machine engaged and it gave a tremendous jolt.

It threw him forward between the horses, which had been helping him with his work, and it spooked them so much that they took off running.

He managed to clamber back up and went to jump off before he got even more injured, but missed. He landed in front of the wheel, which miraculously caught on his body instead of rolling over him.

The horses stopped as soon as he started dragging behind them and he was able to get out from under the wheel.

He didn’t know what to do so he picked up his hat, spread the load on the field, and went back to the corrals.

A few days passed and he was still injured so his parents took him to the doctor. They found out that he had punctured his lung, his pleural cavity was filling with fluid, and he wouldn’t make it through the night.

He didn’t really believe in God at the time so he prayed and said, “Oh, God, if there is a God, I want you to hear me, I want to know what truth is, and I want to believe in you. If you will let me get well, I will get a Bible and read it.”

His family’s pastor had come to the hospital earlier and told him, “You’re such a good boy. If you die, then I’m sure God will be happy with you.”

He was a good boy and so he was sure he would be fine.

The Lord miraculously healed him and, six weeks later, he came home where his mother could take care of him.

For a year, he wasn’t able to do much of anything and, during that time, the attacks on Pearl Harbor took place.

He wanted to go fight in the war, but wasn’t well enough and, while having to stay home, their mailman invited him to some revival meetings where Dr. Bob Jones, Sr., would be preaching.

The first night, it made him extremely mad when he heard Dr. Jones preaching that he was a sinner and on his way to hell because he thought he was a good person. He vowed that he would never go back, but wound up going back on the second night.

Again, the second night, he became so angry with Dr. Jones’ Gospel message that he said he would never go back, but wound up going back the third night.

The exact same thing happened on the third night and, once again, he wound up going back on the fourth night.

On the fourth night, he ended up surrendering and becoming a Christian. He realized he was a sinner and that he needed the Gospel of Jesus Christ.

His life changed drastically because he was no longer living for himself; he was living for God.

One year later, he was called to preach under Dr. Bob Jones, Jr. He didn’t want to surrender to preach at first, but the Lord got ahold of his heart.

He went on to serve in the ministry for over seventy-five years.

Catch the rest of this interview with Emilee Nelson on Remembering Dr. Ed Nelson on VCY.tv