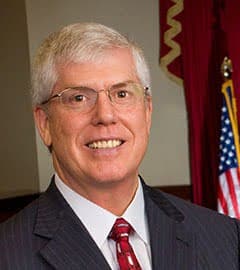 Today in Washington, D.C. the 116th Congress was sworn in and virtually immediately, the attack on biblical values in America began. Fox News reports the day started with a prayer, and ended with profanity. This in response to one newly elected congresswoman who used extremely vulgar language toward President Trump. Other attacks came against the sanctity of human life and against God’s creation of male and female. There was also a call for impeachment and term limits. Joining Jim to discuss it all is constitutional attorney Mat Staver. Staver says this 116th congress, on the house side, “is going to be the most radical House in the history of America.”

Before the discussion on congress began, Jim mentions news from the Supreme Court today that justice Ruth Bader Ginsburg missed oral arguments. Staver confirms saying “this was the first time in 25 years that she has missed an oral argument.” Ginsburg has recently had lung cancer surgery and has undergone treatment. Staver comments this suggests “her condition is more serious than may be reported” and that she is also working from home which “signals that she has a more serious condition than what may be originally reported from the Supreme Court’s press office.”

Getting on to today’s congressional “clash” well, we are in for a very contentious 2 years. Speaker of the House Nancy Pelosi said on Sunday “Well, let me first say that our purpose in the meeting at the White House was to open up the government” she said “The impression you get from the President is that he would like to not only close government, build a wall, but also abolish Congress so, that the only voice that mattered was his own.” Staver quips “That’s really outrageous. Nancy Pelosi who says it is immoral to build a wall but, her first bill she pushed through to this new house passed (which is not going to pass the Senate) gives an additional 12 billion dollars in foreign aid to multiple countries and other millions of dollars to fund abortion internationally….this new democratic house under Pelosi is obsessed with forcing American people to fund human genocide via abortion.” Many believe that in itself is immoral.

Crosstalk then looks at new rules as of last Friday (under Pelosi) that were passed as the “Human Rights Campaign” in the House, which bars discrimination on the basis of gender identity and sexual orientation – a first within the House of Representatives. This opens the door to men who wish to identify as women to freely use the women’s restroom IN the House of Representatives.  “This is what they want to do to the American people so, this is what Nancy Pelosi and her group did to themselves.” Staver believes there is more to this position saying “I believe that they are going to try to target some Christian, conservative, moral based Republicans for ethics charges under the House and perhaps go after them for sanctions and perhaps even impeachment.” Staver also names a new member to the House, Jennifer Wexton (D – Virginia) who posted the “so called transgender flag” outside of her office in the hallway.

Much more is discussed, including Mat’s comments on the House approving the forcing of taxpayers to fund abortions worldwide. The “absurd” proposed bill to require Presidents (not Congress) to release their personal tax returns. Also the introduction of a bill to eliminate the electoral college which Staver says would make it so that just “a couple of states would choose the next President of the United States.” Lastly, you will learn about a proposed trade agreement between the United States, Canada and Mexico (USMCA) which will implement laws to promote non discrimination in employment regarding sexual orientation and gender identity. Staver says that while we want a good trade agreement, this is a “a trojan horse” and demands action. Sign the petition and call your representatives and senators saying “Do not vote in favor of the USMCA with it’s current provisions!” The number to reach the Senate is 202-224-3121.