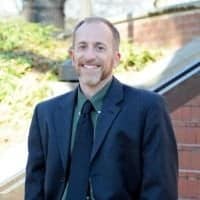 Dr. Robert Carter is a senior scientist and speaker for Creation Ministries International. He has a PhD in Marine Biology. He’s studied the genetics of pigmentation in corals and other invertebrates, designed and built an aquaculture facility for Caribbean corals, performed over 500 SCUBA dives, many of them at night, and licensed a spin-off product of his research, a patented fluorescent protein to a biotech company. He’s also been involved in researching human genetics and other issues related to biblical creation.

After some initial commentary on climate change, Dr. Carter discussed how he overcame a conflict he had within himself at one time; that his religion and his science were at odds with one another. As time went on he recognized that maybe he really didn’t know what he was talking about and that he needed to find out what the history of the world is and how does science relate to the Bible.

Eventually he realized that science and the Bible weren’t at odds. He discovered that science was laid down by Christians from the Middle Ages up through the Reformation and a few hundred years after that. As he put it, ‘It’s Christian philosophy that gave us the tools we need to unpack the created world.’ It wasn’t until the Enlightenment that people did away with the Christian underpinnings and began communicating that the universe operates like a big machine.

One fascinating aspect of this broadcast deals with genetics. Dr. Carter believes that the measurable mutation rate is much faster than the one usually applied to evolutionary history. When you use the former, you get Adam and Eve living just a few thousand years ago instead of hundreds of thousands of years ago.

He also commented on the degeneration of DNA and how this isn’t a problem for the Bible and a belief in creation but it is a major problem for evolution. As DNA is copied from generation to generation, those ‘machines’ copying the DNA in your cells make mistakes. Evolution requires that those mistakes be removed over time. He likened it to a rust spot on a car. One such spot won’t do anything. However, given enough time, that car will rust out. For the DNA that we carry, we pick up our own version of those ‘rust’ spots. These are the mutations/deletions that take place here and there. Any one is inconsequential, but if you add enough of them, the information content of the human genome will be destroyed. That means we can’t survive.

Each of us was born with about 100 mutations that our parents were not born with. Our children each have about 100 mutations that we weren’t born with. That’s about 100 ‘rust’ spots per generation too much, because natural selection can’t get rid of them if every one has mutated. So the number of mutations we’re seeing in our population means guaranteed extinction. This means that the planet hasn’t been populated for millions of years because we’d already be extinct.

This just scratches the surface as Dr. Carter explains why he believes he can trace everyone on earth today back to Noah and his family, why Neanderthals were not a different species, a letter from the Clergy Letter Project dealing with Evolution Sunday, what Dr. Carter believes is happening to our churches, and questions/comments from Crosstalk listeners.