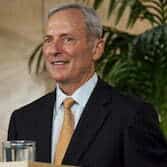 On Monday, February 4th, Pope Francis and the Grand Imam of al-Azhar, Sheikh Ahmed al-Tayeb, met together and signed ‘A Document on Human Fraternity for World Peace and Living Together’, a declaration calling for tolerance and peace among the nations of the world.

Joining Jim to discuss this new development was Mike Gendron. Mike is the founder and director of Proclaiming the Gospel Ministry. Mike was a devout Roman Catholic for 34 years and was taught to rely upon the authority of the church above all else. He searched the Scriptures and was amazed to find that what he read contradicted the teaching and tradition of the church he had been a part of for so long. He trusted Jesus as his Savior and now the Bible has become his sole authority in all matters of faith.

According to Mike the signing represents the first time there’s ever been a papal visit to the Arab-Gulf states, while marking a historical breakthrough in Roman Catholic/Muslim dialogue. He also believes it’s prophetic because of Revelation 17.

This document is a declaration that calls for peace between nations, religions and races. The Pope made sure there was a concerted effort to include all the religions of the world in the audience as Mike believes the Pope knows if he can get Islam, the largest religion in the world, to come on his side, then the rest of the religions will follow. In other words, the Pope’s goal is to bring all religions under the power and influence of the papacy.

Overall, the document gets into topics ranging from social injustice to inequality, to terrorism and extremism. Jim gave one important quote from the document that refers to ‘…a culture of dialogue as the path, mutual cooperation as the code of conduct, reciprocal understanding as the method and standard.’

Is this indicative of interfaith dialogue where so many today say we should get along and cooperate since after all, we have the same God? Mike believes that’s the way this is being approached because he contends that the ‘gods’ of Catholicism and Islam are different. So the two are coming together under a generic ‘god’ in order to form unity.

Jim also noted how the document refers to stopping the shedding of innocent blood. However, history shows how the Catholic church put to death those who wanted the Bible in English for the common person to understand. Islam acts in similar fashion when we hear of someone yelling ‘Allahu Akbar’ as someone is about to have their head taken from them.

Mike agreed and noted that when it comes to Islam, they are allowed to lie as long as it’s in promotion of their religion. This means these documents can’t be trusted in spite of the fact that the Imam who signed it is said to be a tolerant and moderate Muslim who has rejected connections to the Muslim Brotherhood.

He went on to note that the Pope told Muslims that faith in God is what unifies the two groups and pluralism is the will of God. That’s the furthest thing from the truth, but then again, both religions are known for their lies to deceive people.

In the end, both religions are about world dominion so Mike believes they can come together under a generic ‘god’.

For a limited time, Proclaiming the Gospel ministry is offering the 2-message DVD called, ‘The Coming One World Religion’ along with a second message, ‘Crisis in the Church’. He has reduced this to $12 which is a 20% discount for Crosstalk listeners. If you obtain this DVD, he will also include a free Gospel tract, ‘Rome vs. the Bible.’ To obtain this offer, visit www.proclaimingthegospel.org. Click on ‘Store’ then click on ‘Video Messages’. You may also call 1-817-379-5300.