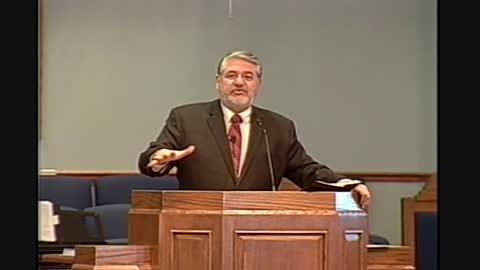 We’re living in a time in which some people are taking the position that you can be true to identifying as a homosexual and at the same time be true to God, to Christianity, and to the teachings of Scripture. Churches which one time took positions in opposition to homosexuality and transgenderism are now removing their opposition and have become what some term, “opening and welcoming” on the subject allowing those who identify as being homosexual or transgender into their church membership and even into positions of authority in the church including that of the pastorate. Some are saying that you can even support homosexual marriage without betraying God. Churches that have not changed have been said to be unwelcoming, intolerant and even bigoted. The question is: What does the Bible have to say on the issue? Is there compatibility between identifying as LGBTQ and identifying as being a born-again Christian?

Joining Jim in discussion on this important topic was Dr. David Brown. Dr. Brown is the pastor of the First Baptist Church of Oak Creek, WI. He holds a Masters Degree in Theology and a PhD in History, specializing in the history of the English Bible. He’s also the President of Logos Communication Consortium, a research organization that produces a large variety of materials warning Christians of present dangers in our culture.

The Human Rights Campaign Foundation has a booklet called, ‘Coming Home to Evangelicalism and to Self’. It addresses those that are living openly and also fully as a homosexual while at the same time being true to God and Christianity. It notes that evangelical LGBTQ individuals have been taught through the church that such relationships may be sinful yet these people of faith know deep within them that they were born that way. Is that true?

Dr. Brown began by telling the audience that God makes this very clear in Genesis where it says ‘…male and female created he them.’ You are either XX (female) or XY (male). He’s amazed at how many people are willing to put away science for feeling.

I Corinthians 6:9-11 says, ‘Know ye not that the unrighteous shall not inherit the kingdom of God? Be not deceived: neither fornicators, nor idolaters, nor adulterers, nor effeminate (the one who takes the female part in a homosexual relationship) nor abusers of themselves with mankind (that’s the one who takes the male part) Nor thieves, nor covetous, nor drunkards, nor revilers, nor extortioners, shall inherit the kingdom of God.’

The next part says, ‘And such were some of you: but ye are washed, but ye are sanctified, but ye are justified in the name of our Lord Jesus, and by the Spirit of our God.’

Dr. Brown described how in context this is not a one-time incident but rather a lifestyle involving these practices, so as far as being born that way is concerned, such individuals are deceived.

He admitted that when he was dating, he had the deep desire to have sexual relationships those girls he dated. He did not engage in that because the Bible says that activity is to be confined to the marriage relationship as I Corinthians 7 makes clear. So just because someone has the deep desire within themselves to engage in something doesn’t make it biblical. The born-again believer will instead put off the old man and put on the new man.

Can a person be both faithful to God and to the understanding of themselves as being LGBTQ?

On this point Dr. Brown looked to Jude 1:3 where it encourages us to earnestly contend for the faith that is once delivered to the saints. Then in Romans 1:25-27 it says, ‘Who changed the truth of God into a lie, and worshiped and served the creature more than the Creator, who is blessed for ever. Amen. For this cause God gave them up unto vile affections: for even their women did change the natural use into that which is against nature: And likewise also the men, leaving the natural use of the woman, burned in their lust one toward another; men with men working that which is unseemly, and receiving in themselves that recompense of their error which was meet.’ (or right)

So when God defines something as wrong, you can’t be faithful to Him and to your calling of what God says is the wrong kind of affection.

Dr. Brown let listeners know that Jesus never calls anyone to immorality. When he confronted the woman taken in adultery in John 8:11, Jesus told her to, ‘… go, and sin no more.’ God blesses repentance!

This covers just a portion of this broadcast and Dr. Brown covers a lot of Scripture as he deals with each of Jim’s points. Listeners were given an opportunity to have their say in the matter as well as the LGBTQ lifestyle and the Bible were contrasted on this edition of Crosstalk.