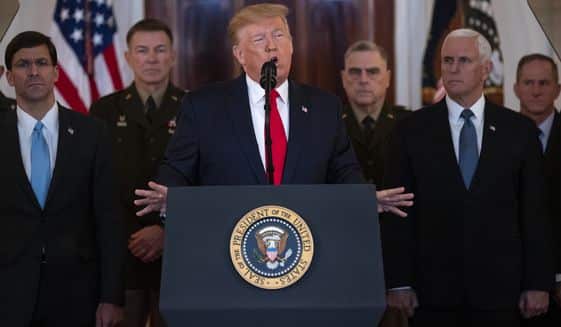 Last evening, Iran shot more than a dozen missiles at U.S. military bases in Iraq in retaliation for the death of terrorist Qasem Soleimani, commander of Iran’s Quds Force.

Jim played a recording of President Trump who spoke this morning about the incident, while also providing followup headlines that included the following:

–House Speaker Nancy Pelosi wants the House to vote on a resolution under the War Powers Act to stop President Trump from acting against Iran after 30 days unless Congress authorizes further military operations.

–House Speaker Nancy Pelosi was ‘tweeting’ her criticism of President Trump while the Iran missile response was unfolding.

–Representative Ilhan Omar expressed her outrage at President Trump on Twitter, hinting that he ordered the act against Soleimani in the hope that a war would result that would serve as a distraction from the ongoing impeachment.

–Representative Pramila Jayapal of Washington sent out a ‘tweet’ calling for people to join street demonstrations Thursday that are being promoted by MoveOn.org.

–Senator Ted Cruz praised the response of the Trump administration as opposed to the Obama/Biden administration that sent billions of dollars to Iran, helping that nation to fund the missiles that were fired at our forces.