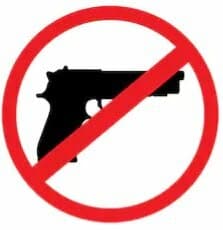 Virginia, gun owners in the crosshairs? Are you aware that there are attempts being made to severely curb the 2nd Amendment rights of citizens in our 10th state?  A number of bills have been introduced in the state legislature where this very day, Virginia’s Senate Judiciary is taking up this legislation on what is only their fourth day of the 2020 General Assembly session.  More than 90 localities have passed second amendment sanctuary resolutions ahead of this session.  If the legislation passes out of Committee, it will advance in the legislative process.  It’s reported that some of the proposals, if passed, could take effect as early as July 1st of this year. Joining us to discuss this today is Mike Hammond. Mike is with the Legislative Counsel for Gunowners of America.

First and foremost, this news is from Virginia – why should the rest of us be concerned? We’re glad you asked.

Jim will ask Mike what has brought us to this point; where there is such a barrage of bills that target the 2nd Amendment? What did the 2nd Amendment mean to the Founders?  To the drafters of the Amendment?  How should we respond in that for some time now, China has been saying that the US should learn from THEM – and begin restricting gun ownership? We see a number of bills were introduced in the past few weeks such as HB 567 – will this decimate the state’s indoor gun ranges?  Could it mean that gun ranges will soon be government owned? There is bill SB-12 which calls for universal background checks. Then there is B-70 which is another universal background check bill, but says the penalty should not be a misdemeanor, but a felony.  Then there is SB543 which makes background checks mandatory for all sales or transfers at Virginia gun shows.  And that’s not all. Mike comments and we take your calls – this is a MUST HEAR, MUST SHARE edition of CROSSTALK.