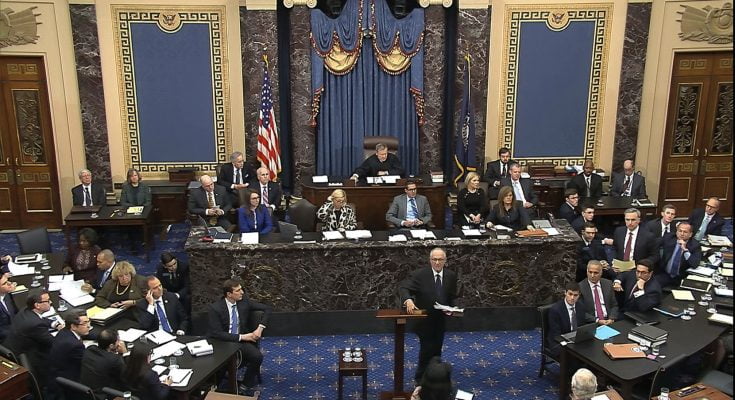 2 articles of impeachment were approved by House Democrats against President Donald Trump.  House Speaker Nancy Pelosi stalled in delivering these articles to the Senate, in spite of the fact that Democrats considered them to be very urgent.  The chief justice and senators were sworn in, House prosecutors took 3 days to make their claims and then the president’s legal team also took 3 days to refute those claims.

Joining Jim to tie all of this together and bring listeners up-to-date was Mat Staver.  Mat is the founder and chairman of Liberty Counsel. Mat is a constitutional attorney with over 230 published legal opinions, has authored 8 scholarly law review publications and 10 books.  He has filed numerous briefs and argued in many federal and state courts. He’s also argued two landmark cases before the U.S. Supreme Court.

Does the alleged abuse of power and the alleged obstruction of Congress (the articles of impeachment at issue here) meet the constitutional standard for impeachment?

According to Mat they do not.  The Constitution provides a way for impeachment for three reasons: treason, bribery and other high crimes and misdemeanors.  The latter category involves known violations of existing, criminal law that are so severe that elections cannot resolve them.

The Democrats contend that Trump abused power with regard to a phone call involving the president of Ukraine.  Mat indicated that the president has full authority in regard to how he handles international leaders. In the case of Ukraine, their president never knew that aid (it’s not unusual for aid to be withheld) was withheld.  In five subsequent conversations, aid was not discussed and the Ukrainian president said he never felt pressured. In other words, no quid pro quo. In fact, they have more assistance and aid under President Trump than they ever had under the Obama administration.

The subpoenas were contested in the courts, so when the House committee realized they had invalid subpoenas, they made an issue in the media that this was resistance from the president.  Eventually they withdrew them because they knew they were invalid due to the lack of a vote by the full House, an omission that by itself violated the rule of law.

Does Impeachment Manager Adam Schiff know who the ‘whistleblower’ is?  Mat communicated that he does because his staff spoke to the whistleblower before that person gave the complaint.

So why would Schiff claim he doesn’t know this person?  Mat believes Schiff is a liar. He cited as proof the conversation President Trump had with the Ukrainian president.  President Trump allowed the public to see that conversation. However, Schiff ‘rewrote it,’ ‘twisted it’ and spoke this into the Congressional Record.

This is just some of the information from the first quarter hour of the program.  Jim and Mat provide much more and it’s yours to hear on this edition of Crosstalk.