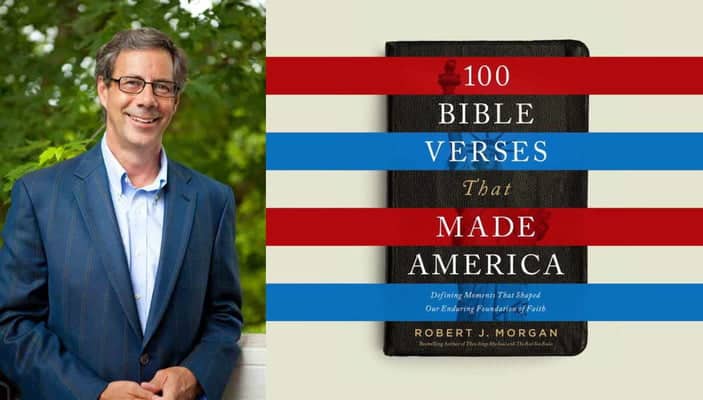 The Bible has played an essential role in American history, from the Mayflower to modern times.  While not every founding father was a Christian, each was knowledgeable of the Bible. And while none of them was perfect, many embraced a deep faith in the unfailing Word of God.  Again and again, specific Bible verses and crucial biblical lessons have impacted critical moments and influenced the American way of life.

To discuss these critical moments, Crosstalk welcomed Robert Morgan.  Robert is a writer, speaker and pastor. He has more than 35 books in print with more than 4.5 million in circulation.  Some of his books include 3 volumes of ‘Then Sings My Soul,’ ‘Worry Less Live More,’ and a brand new book just released, ‘100 Bible Verses That Made America: Defining Moments That Shaped Our Enduring Foundation of Faith.’

In the prologue of Robert’s book, he takes readers to April 30th, 1789, when George Washington took his oath of office.  It was in New York City when Washington came out on to the balcony at the old Federal Hall where crowds filled the street.  He place his hand, not on the Declaration of Independence or the Constitution, but on a Bible that had been opened to Genesis 49.  This is the portion of scripture concerning the sons of Jacob who were destined to become a great nation. As soon as he finished the oath, he bent over and kissed the Bible, showing his reverence for scripture.  In other words, Washington understood that America’s founding documents had derived authority and that the real authority was in the Bible.

Robert believes if there had been no Bible, there would be no America as we know it or perhaps even an America at all.  Several English settlements were attempted in the New World. For example, Jamestown was a secular and commercial disaster.  On the other hand, the Pilgrims, along with the Puritans who followed them to New England were, as Robert described them, ‘…the best trained, smartest, greatest generation of Bible scholars that England had produced.  It was the English Reformation and they had all graduated from Cambridge and they were driven out of England because of their Puritan views and they emigrated by the thousands to America.’ That established colonies that were grounded on a desire for freedom, particularly religious and political freedom.

From there we see the Great Awakening involving George Whitefield and Jonathan Edwards.  This event galvanized the colonies, uniting them together and restoring a great passion for liberty.  In other words, there would have been no moment for revolution and independence if it wouldn’t have been for the unity and desire of the Great Awakening coming upon the descendants of the Pilgrims who’d come here to seek religious liberty.  In fact, Robert tells people that, ‘… trying to remove the Bible from our American history is like trying to jerk the pedestal out from under the Statue of Liberty. It just cannot be done.’

If you’re concerned about what some might describe as the sanitizing of everything biblical from our history, or if you’re just a fan of American history in general, you’ll want to review this edition of Crosstalk.

More Information
The book ‘100 Bible Verses That Made America’ subtitled, ‘Defining Moments That Shaped Our Enduring Foundation of Faith’ has recently been released.  It’s a hard cover book over 350 pages, but each chapter is just a few pages long where you can pick it up and read a chapter at any time and gain the story.  It retails for $29.99, however, as one of the featured books of the month from our VCY Bookstore, through February 29th, they are offering this book at 40% off the regular price.  The final cost is $17.76 plus any applicable tax and shipping.  This offer expires February 29th.  It’s obtainable through vcy.com or by calling 1-888-722-4829 between 10am-6pm Central Time M-F or Saturday from 10am-4pm.