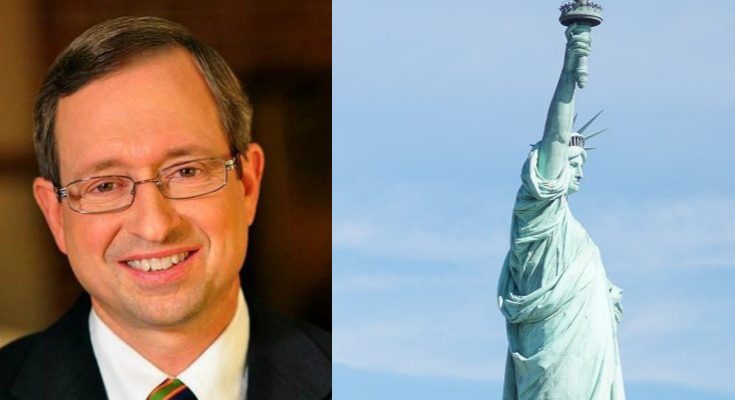 Sam Rohrer is the president of American Pastors Network and the Pennsylvania Pastor’s Network.  He’s also host of ‘Stand in the Gap.’ Sam is a former state representative in the Pennsylvania Legislature as he sought to apply biblical principles in all areas of legislation.  He was often referred to as the ‘Conscience of the House’ because of his consistent stance for moral truth in public policy.

Why is immigration such a hot topic amid the current political climate?  Sam believes it’s only because we as a culture and nation have walked away from God’s simple understanding of what constitutes a nation, the purpose of government and government leaders (Romans 13).

Sam defined a nation as an area defined by a common language, worldview, and identifiable boundaries.  God defined those boundaries so they’ve been with us since the beginning of time.

God works through nations for the fulfillment of His plan of redemption.  America, on the other hand, appears to be walking away from God’s plan expressed in the biblical worldview.  So what used to be of no controversy now is controversial. In other words, look at how this nation views human sexuality or marriage.  Sam believes boundaries fall into that same category and hence, that subject is now controversial as well.

Is there a difference between how a government should respond to immigration compared to how the Christian should respond?  Sam referred to what he called the ‘jurisdictional approach.’ What is the purpose of government from God’s perspective? It’s to praise those who do well (protect those who follow God’s moral law) and to punish those who break God’s moral law and the law of the land.

You may wonder what borders have to do with government.  A government has leaders who have a responsibility to protect the lives of its citizens.  So you can’t define ‘citizen’ unless you have borders. This means the fundamental purpose of government is to maintain borders.

As ‘the church’ we are to carry the gospel to all people regardless of whether it’s our next door neighbor or someone in another nation.  However, as Sam noted, ‘…the church and the individual should never be in violation against the purposes that God has established for government which is to protect its people and its borders.’

What is the believers responsibility in all of this?  How should our nation proceed as we navigate this contentious issue?  Doesn’t the text at the Statue of Liberty demand open borders? Are spiritual and political leaders misapplying Scriptures such as Leviticus 19:34 and the story of the Good Samaritan when they try to apply them to the subject of illegal immigration?

These and other questions are examined, and callers weigh in as well, during this critical edition of Crosstalk.