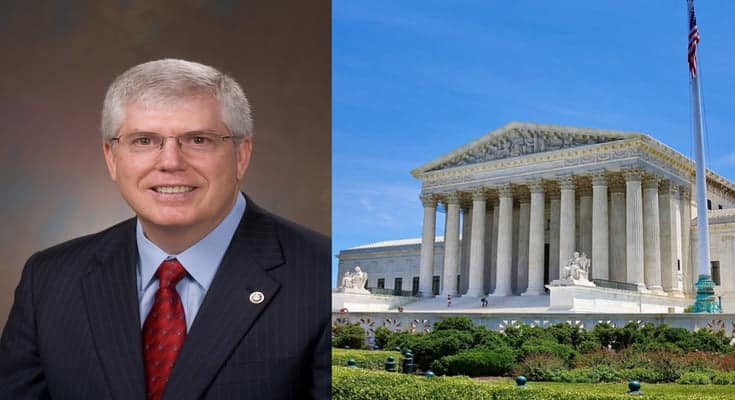 There are changes in the reporting of the coronavirus on a day-by-day basis as well as the responses that we’re seeing from all levels of government.  U.S. hospitals are adding more beds as well as screening and limiting visitors. Some hospitals are canceling elective surgeries. Actions are taking place in the offices of state governors and even local mayors as they take extreme measures and claiming extreme powers to limit or even close businesses.

Is this a time for fear and panic?

Joining Jim to answer that question was Mat Staver.  Mat is the founder and chairman of Liberty Counsel.

The program began with audio from Congressman Devin Nunes who was attempting to quell the panic and fear that some have as they think that there’s a food shortage across America.  After that Jim presented audio from Governor Andrew Cuomo who believes we’ve been behind this disease and that we need to begin building temporary medical facilities.

Mat communicated that this isn’t a time for panic and that some of the statements being made and actions being taken are beyond what is necessary in light of the situation.  Yes, he believes we need to take precautions and not ignore the virus. However, the precedent we set today sets us up for how we’ll handle something even greater in the future.

Remember the restrictions and how they began with a limit of 250 people at gatherings?  Then it dropped to 100. It dropped again to 50 and in some cases it’s now down to 10. This  is just one example that demonstrates why he feels it doesn’t matter how much stimulus the government wants to give out, it won’t be enough to handle the response if we continue to head down the road of restrictions for industries, restaurants, etc.

Mat’s concern is that this has become a panic mode situation among different legislators.  A legislator or a governor might want to declare, by executive order, a state of emergency.  That could provide the governor with enormous, unchecked powers that really haven’t been tested yet under the Constitution.  Such emergency conditions usually don’t come into play until we have a natural disaster, are usually temporary, and in those circumstances people can usually agree upon the response.

Mat made a comparison by looking at CDC statistics concerning the flu which runs from October through March.  In this season, they’re estimating 18,000 deaths (100 deaths per day in a 180-day flu season). If we acted under those circumstances in the way we’re acting toward the coronavirus, we’d be so paranoid that the world would shut down for six months out of the year.

So overall, Mat believes we need not be fearful, but we can and should protect ourselves, while those who have certain health conditions should take extra precautions.  At the same time we need leaders that will give us the full information so that private industries and non-profits don’t get crushed with everyone relying upon the federal government for a ‘bailout.’

That’s just an overview of the first quarter-hour.  There’s much more to learn when you review this vital Crosstalk broadcast.