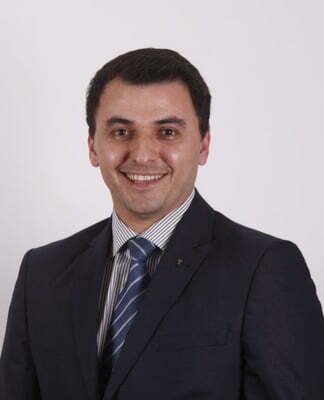 Michael Germi (Gear-me) was born in Iran into a Shia Muslim family, found faith in Jesus Christ and now proclaims the Gospel to Islamic nations.

Michael grew up a year after the revolution in Iran.  Under the Shah, Iran was a rich nation, but not long after Ayatollah Khomeini came in 1979, war started breaking out with Iraq.  This brought destruction and poverty with Michael being fearful that enemies would be coming to Iran.

When Michael was six years old, his mother taught him her perspective regarding heaven and hell.   The idea was to scare Michael so that he would start praying.  Part of her explanation involved a bridge made up of one thin hair that had to be crossed in order to get to heaven.  Underneath that bridge is hell-fire.  She then told him that if he would pray 5 times a day toward Mecca in Arabic, fast at Ramadan, do self-harming, remain committed to Shariah law and follow the other numerous rules and regulation of Islam, he’d be able to cross that bridge.

Then in 2005-2006, the Iranian government contracted with the Australian government to send educated Iranians to Australia.  Over one-million people applied for this visa but only 2,000 people obtained one and Michael was part of that group.

It’s during this time he began to notice things wrong with Islam. He wondered why in Iran, Iraq, Afghanistan, Egypt and Syria there’s always fighting and killing and no freedom.   He also wondered why Christians in Europe and Australia, who he felt didn’t know God, seem to have freedom and blessings.  He began to wonder if perhaps their God is the true God.

Review this edition of Crosstalk and you’ll discover how God used a Persian ‘infidel’ to help Michael get through the dilemma he had concerning his soon to be expired visa, and how this expression of Christian hospitality helped set Michael on a path that would change his life forever.

Transformation of a Nation

History of the Income Tax