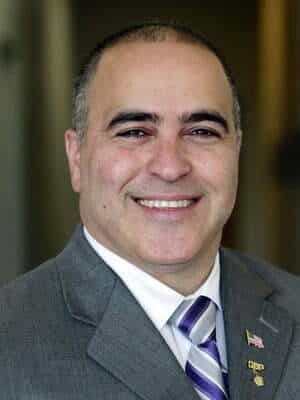 Islam is making its advance across America.  It’s quest is for world domination, a world caliphate.  The message shared on this edition of Crosstalk was delivered by Shahram Hadian in October, 2018 before a ‘Steeling the Mind’ conference which was held in Denver, Colorado.  It’s called, ‘Eyes Wide Open!’ as Shahram addressed America’s Muslim Agenda.

Shahram Hadian is a former Muslim born in Iran who came to the states in 1978.  An individual shared the Gospel with him and though offended at first, he committed his life to Jesus Christ.  Shahram has begun the TIL Project, the Truth in Love Project, which exposes the true goal of Islam and the threat of Sharia in America.  He has served as a pastor and a police officer, and a former candidate for Governor in Washington State.

Shahram began by saying Christians should be able to look to the signs of the times, understand what the times are telling us and what the Spirit is saying…that we are heading toward that time of a one world religion.

One of the signs is the belief today that the absolute truth of  Christianity is considered sinful, racist, narrow-minded, unloving, un-christlike or that you’re even a white supremacist.  Some of these accusations even come from people within the church.

He noted how the National Council of Churches and the World Council of Churches have been promoting Marxist, socialist, globalist and now Islamic propaganda.  He specifically cited the Minnesota Council of Churches who in the last year and a half have been encouraging churches and Christians to put up yard signs telling Muslims that they want to bless Ramadan.  Ramadan is the time of month where Muhammad claims that the revelation of the Qur’an came, yet the Qur’an is a book that denies every major tenet of Christianity.  So why would churches bless an ideology that denies the Christian faith?  That’s a divided house.

Replacement theology is growing at an alarming rate.  That ideology perverts support for the nation of Israel.  As Christians betray biblical Israel, confusion sets in concerning the ideology of Islam.  For example, you see Christians become  pro-Palestinian when we know there’s never been a Palestinian homeland nor has there ever been a nation called Palestine.

Shahram, therefore, believes that Islam is part of God’s judgment in the last days and those threats are coming from globalism, socialism, Marxism, and the push for one-world government.  However, the push for one-world religion has to have Islam as the centerpiece.  Why?  It’s because Islam makes up the second most populated group on earth (1.7 billion adherents).

Shahram went on to examine biblical evidence from Ezekiel 38 as well as Psalm 83, the latter of which communicates an enemy wiping out the nation of Israel so that their name is no longer remembered.  That couldn’t have happened before 1948 because there was no nation called ‘Israel’ between 586BC and 1948.  Interestingly, if you look at the Hamas charter, not only does it say they want to wipe Israel off the planet and force them into the sea, they don’t want that name ever remembered.  In addition, every nation listed in Psalm 83 is today, an Islamic one.

Is this coincidental or are we seeing Bible prophecy play out in this scenario that appears to be moving us toward one-world religion?

Shahram has much more, not only during this hour of Crosstalk, but on the CD and DVD editions that can be ordered via the contact information below.

You may want to obtain multiple copies so that you can share this important message with others.