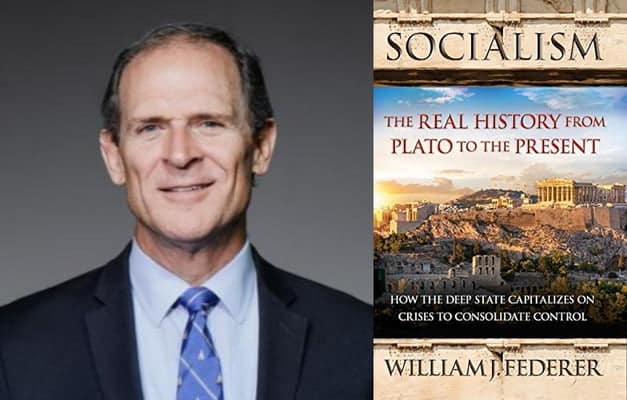 William Federer is a nationally known speaker, historian, author, and president of Amerisearch, Inc, a publishing company dedicated to researching America’s noble heritage.  He’s the speaker on The American Minute daily broadcast.  He’s authored numerous books including, America’s God and Country Encyclopedia of Quotations, Who is the King in America? and the 2020 released book, Socialism:  The Real History From Plato to the Present in which he analyzes how the deep state capitalizes on crises to consolidate control.

What we’ve been seeing in the aftermath of the election are things that seemingly follow the socialist playbook.  To prove his point, William gave listeners a brief history lesson beginning with conditions after WWII.  It was a time when the Soviet Union wondered whether to have communism run their nation or should it run the world?  The second attitude won out and William described how the KGB moved to project influence and power within the new nations that had formed out of the ashes of war.  Those nations included Romania, Czechoslovakia, Hungary, Poland and Lithuania, nations that had elected new leaders.  Jim noted how this modus operandi is playing out in the present within America.

After this, William commented on the following:

–The post-election environment in Pennsylvania.

–The specific types of ballot/voter fraud that are alleged to have occurred.

–How the Democrats sabotaged Herbert Hoover as they wanted to install FDR and his big government socialist programs.  Sound familiar?

William said the following in regard to news that Attorney General William Barr is authorizing federal prosecutors to pursue alleged voter irregularities: ‘This is the last stand for not just America but the world.  If they can get away with massive voter fraud on this scale, there will never be another honest presidential election ever.  And Lindsey Graham just said that today.’

These are very sobering words to ponder.  Learn more on this issue, and hear what callers had to say, when you review this edition of Crosstalk.

Book Offer: Socialism–The Real History from Plato to the Present is available for a donation of $18 or more to Crosstalk available at vcyamerica.org or by calling 1-800-729-9829.