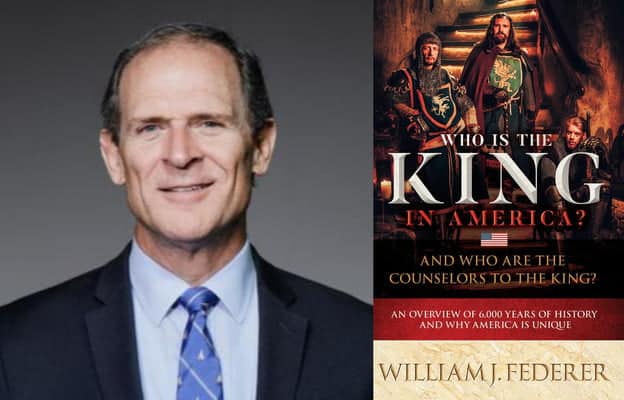 In protests around the nation, you’ve probably heard people chant, ‘This is what democracy looks like!’  In addition to that, members of Congress have talked about our ‘democracy.’  However, in our Pledge of Allegiance it says, ‘…and to the republic for which it stands…’.

So what is the United States of America?  Are we a democracy or are we a republic?

Joining Jim to answer that question was William Federer.  William is a nationally known speaker, historian, best-selling author, and president of Amerisearch, Inc, a publishing company dedicated to researching America’s noble heritage.  He’s the speaker on The American Minute daily broadcast.  He has authored numerous books including, America’s God and Country Encyclopedia of Quotations, The Original 13, Socialism: The Real History From Plato to the Present and Who is the King in America: An Overview of 6,000 years of History and Why America is Unique.

Beginning with the word ‘democracy’ William noted that it has two meanings.  One refers to an actual form of government where the people rule and the majority can decide to get rid of the ’49 percent.’  America’s founding fathers called that a ‘mob-ocracy.’

How does a democracy and a republic compare to other forms of government such as a monarchy, an oligarchy or a dictatorship?  William answered that by first looking at the origins of where the terms ‘democracy’ and ‘republic’ came from.  This requires starting at the beginning and looking at kings, the most common form of government in world history.

William explained that in America we have a democratically elected constitutional republic.  This means that our elected representatives can’t do whatever they want.  These representatives have guidelines to follow such as the length of their terms, they can’t take away our right to keep and bear arms or our right to free speech, etc.  In other words, they are limited by a constitution.

If you enjoy world history and want to know how it helped shape the kind of government we have in America, you’ll want to review this unique edition of Crosstalk.