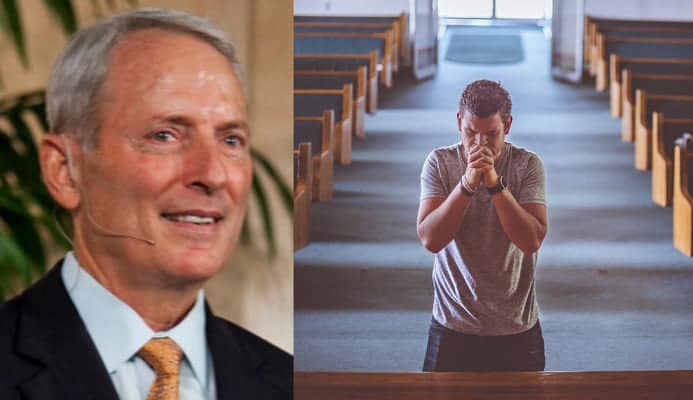 Over the past several weeks there’s been discussion concerning President Joe Biden’s Catholic faith.  He’s been portrayed as a ‘devout’ Catholic, yet just days ago, the Archbishop of Kansas City, Kansas, said that Biden should stop defining himself as a devout Catholic because of his push for pro-abortion policies.  On the other hand, on inauguration day, Pope Francis extended cordial good wishes to Biden with no word concerning his position on abortion.

To help listeners sort out the debate concerning the issue of being devout, Crosstalk welcomed back Mike Gendron.  Mike is the founder and director of Proclaiming the Gospel Ministry.  Mike was a devout Roman Catholic for over 3 decades and was taught to rely upon the authority of the church above all else.  Mike searched the Scriptures and was amazed to find that what he read in Scripture contradicted the teaching and tradition of the church he had been a part of for so long.  He trusted Jesus as his Savior and now the Bible has become his sole authority in all matters of faith.  Mike is the author of the books, Preparing for Eternity and Contending for the Gospel and has produced numerous videos with warnings concerning false teachings vs. the truth of the Scriptures.

This program began by laying a foundation through defining of the word, ‘devout.’  Mike believes being a devout Catholic means different things for different people.  As a former devout Catholic, for him it meant being a strong defender of what he felt at the time was the one, true church.  He attended Mass every day during Lent, practiced the sacraments, supported the church financially and did what he could to obey the laws of the church.

He went on to note that a Catholic is baptized into the religion and then is immediately indoctrinated into different teachings of the church.  In Mike’s case, the one that impressed him the most was the belief that the Catholic church was the one true church founded by Christ.  The problem was that he was trusting in his religion to get him to heaven and not God.  He believes this is the big difference between a devout Catholic and a devout Christian.  Later Mike phrased the issue this way: ‘So you can see on one hand the devout Catholic is dedicated to his religion, whereas the devout Christian is dedicated to serving and glorifying the Lord Jesus Christ.

As the program continued, Mike addressed the following and more including:

More Information
To obtain a copy of Mike’s latest DVD, I’m a Christian, You’re a Catholic.  So What’s the Difference, go to proclaimingthegospel.org or call 817-379-5300.  This offer includes a copy of the publication called, You Can Never Do What Christ Has Done.