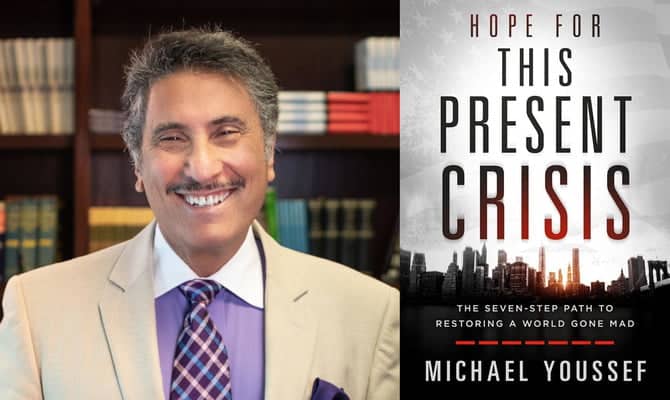 If you feel you’re living in the most turbulent period of your lifetime, you’re not alone.  Today, forces are at work to strip the principles and precepts of the Christian faith from public venues and minimize their significance.  But even though these times seem frightening, there is hope.  Troubled times give us an opportunity to know Christ more fully and to make Him known to people around us.  That’s an excerpt from the book, Hope for This Present Crisis: The Seven Step Path to Restoring a World Gone Mad by Dr. Michael Youssef.

Dr. Youssef is the founder and president of Leading the Way and founding pastor of The Church of the Apostles based in Atlanta.  He’s authored numerous books including the one discussed today on this edition of Crosstalk.

COVID-19, the economic shutdown, civil unrest, riots, fires, looting, destruction of the signs of our nation’s heritage…all these and more are frightening enough, but according to Dr. Youssef, there’s a greater crisis confronting our nation.

According to Dr. Youssef, the factors just mentioned are only symptoms signaling a a crisis of truth.  He believes that once truth has been undermined, there’s no longer a basis for humanity to operate in relationships.  That’s the foundational breakdown he sees today.

At the same time he sees the decline of the Christian church as well.  He puts the full blame on pastors in the pulpits because that’s where he believes the undermining of the truth began.  Instead of pastors being a guide for a lost culture, they are now following the culture.  Such friendship with the world establishes enmity with God.  He described it this way, ‘…because as goes the pulpit, so goes the pew, and as goes the pew, so goes the culture.’

Dr. Youssef believes it’s time to get back to the truth.  Once it begins to be established, there will be an awakening.  This is the hope he describes in the 7-steps portion of his book, which you can obtain via the information listed below.

More Information
Hope for This Present Crisis is one of the featured books of the month at the VCY Bookstore.  They have worked out a special arrangement with the publisher that is offering this book through March 31st at 48% off.  This hardcover book retails for $24.99 plus any applicable tax and shipping.  However, as a book of the month, our bookstore is offering this title for $12.99 plus any applicable tax and shipping.  It’s available through vcy.com or by calling 1-888-722-4829.