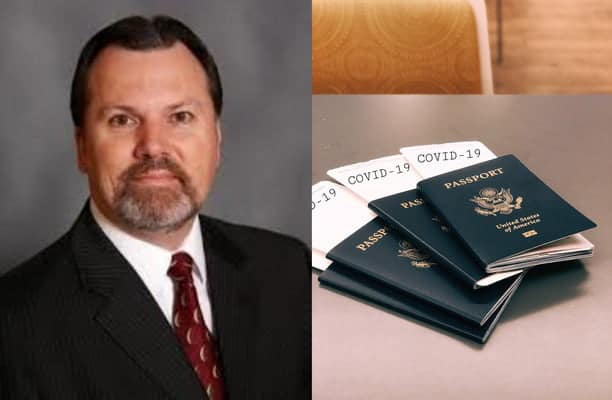 Gary Kah is the founder and director of Hope For the World.  He is the former Europe & Middle East Trade Specialist for the Indiana State Government.  In 1987, Gary was invited to join the World Constitution and Parliament Association, one of the organizations involved at the forefront of promoting the world government agenda. During the next 4 years he obtained detailed documents which demonstrated that the push toward a one-world government was active and rapidly advancing. Gary is the author of Enroute to Global Occupation and The New World Religion.

New York is the first state to implement a vaccination passport that they call the ‘Excelsior Pass’.  Gary communicated that they’ll work out any ‘bugs’ by monitoring how people react and what they need to ‘tweak’ to make it more acceptable to others.

Gary told listeners how Bill Gates has been involved in numerous areas of technology that are coming together linking biometrics, digital identity systems with vaccination records, and a payment system.  In fact, he described an experiment taking place in West Africa where all of this is being tested.  So unless God does a miracle and people take a stand, he believes we’ll see this unfold very rapidly.

So what is that agenda?  Gary labeled it simply as global government.  With that comes a world economic system where the payment system is controlled.  This means that those who don’t take a vaccine or some other controlling element will be shut out.  Ironically, this is being done in the name of democracy and to protect us from ourselves.

Jim also read some information from White House Press Secretary Jen Psaki.  He summarized it by noting that the private sector will create the vaccination passport while the government will set the guidelines.

While Psaki did say it won’t be mandatory, Gary believes the government will make things so difficult that if you don’t fall in line, for all practical purposes, it will be mandatory.  They’re simply posturing things this way at the start so that many people don’t back away from it.

As this broadcast moved along, Jim and Gary discussed the following:

These and other questions/concerns are dealt with on this important edition of Crosstalk.