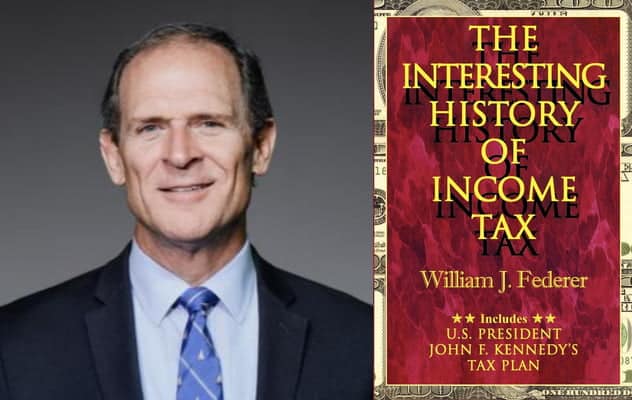 April 15th is a day that has gone down in notoriety.  On April 15, 1865, President Abraham Lincoln died.  He was shot the night before in Ford’s Theatre. On April 15, 1912, the Titanic sank, having struck an iceberg the night before. April 15, 1927, was the Great Mississippi Flood where some 15 inches of rain fell in 18 hours causing the river to break out of its levee system at well over 100 locations and caused flooding in 10 states.  In 1954, April 15th became the deadline for filing income tax returns.  No doubt you’ve heard the familiar quote of Benjamin Franklin who said, ‘Our new Constitution is now established, everything seems to promise it will be durable; but in this world, nothing is certain except death and taxes.’

We have all come to realize the impact taxes have upon us, but are you aware of the history of the Income Tax and how it came about?  What was its purpose?  Is today’s modern system of taxes a breach from what was originally intended?

Joining Jim to look at this issue was William Federer.  William is a nationally known speaker, historian, best-selling author, and president of Amerisearch, Inc, a publishing company dedicated to researching America’s noble heritage.  He’s the speaker on The American Minute daily broadcast.  He has authored numerous books including, America’s God and Country Encyclopedia of Quotations, Socialism: The Real History From Plato to the Present, Who is the King in America: An Overview of 6,000 years of History and Why America is Unique, and a book that’s the focus of this broadcast, The Interesting History of Income Tax.

Originally our government paid for things through tariff taxes on imports as well as from excise taxes on specific items.  The federal government was not to have a direct tax on citizens.  The idea was that if you tax imports making them more expensive, people will want to buy things from American factories at less cost.

From there the conversation moved to Abraham Lincoln and the emergency revenue tax which was a tax on individuals and their income.  It was used to pay for Union forces during the Civil War.

There was an attempt to tax the rich in 1894.  It went all the way to the Supreme Court and the they declared it unconstitutional.

Tariff taxes allowed American industries to improve and they began to produce steel to build railroads, steamboats and appliances for farms.  In fact, the standard of living was raised faster than at any other period in world history.

This growth caused large amounts of wealth to be amassed by industrialists.  They began to pay for the campaigns of politicians, so Theodore Roosevelt tried to limit their power through the inheritance tax.

William kept the history coming as he moved on to discussion concerning William Howard Taft and his tax on corporate profits, Woodrow Wilson who pushed through an emergency 1% tax on the top 1% of the richest in America, the beginning of tax exempt charitable foundations, as well as FDR who pushed through the largest tax increase in American history where everyone would pay taxes to help smash the Axis powers during WWII.

William has more and you’ll hear it all as he brings another great history lesson to listeners of Crosstalk.

More Information
Book Offer: The book, The Interesting History of Income Tax is 176 pages and is available for a donation of $18 or more to Crosstalk.  It’s available at vcyamerica.org or 1-800-729-9829.