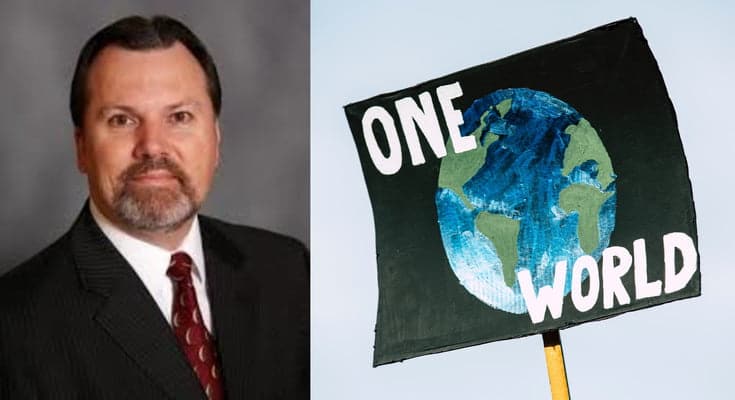 The United Nations, the World Health Organization and the World Economic Forum have been pushing for world governance.  In fact, as far back as the late 1990’s,   John Anderson of the World Federalist Association was calling for world government.  This push continues and a primary proponent of this concept is Pope Francis.

Returning to Crosstalk to discuss the latest news surrounding this topic was Gary Kah.  Gary is the founder and director of Hope For the World.  Gary is the former Europe and Middle East Trade Specialist for the Indiana State Government.  In 1987, he was invited to join the World Constitution and Parliament Association, one of the organizations involved at the forefront of promoting the world government agenda. During the next 4 years he obtained detailed documents which demonstrated that the push toward a one-world government was active and rapidly advancing. Gary is the author of Enroute to Global Occupation and The New World Religion.

Gary began by noting that Pope Francis has been openly holding an increasing number of meetings at various levels involving the environment, the new coming global financial system and the vaccines.

To back up his point, Gary cited information from an article published by a Catholic news organization known as LifeSite News.  They indicated that Pope Francis has addressed the World Bank and International Monetary Fund at their Spring meeting, while also calling for global governance in light of COVID-19.  He also advocated for universal vaccines and bemoaned the ecological debt which he believes is owed to nature itself.

The article also notes the Pope’s use of the phrase, ‘universal common good’.  Gary pointed out that this phrase is also used by Marxists and socialists.  The Pope also expressed his hope that, ‘…your discussions will contribute to a model of recovery capable of generating new, more inclusive and sustainable solutions to support the real economy, assisting individuals and communities to achieve their deepest aspirations and the universal common good.’

As he spoke with the World Bank and IMF, he also stressed the development of trust  relationships with people, spoke of building bridges and envisioning long-term inclusive projects, all for the aim of global government.

Gary believes the Pope couches concepts such as ‘the universal common good’ under the guise of climate change.  In other words, everyone has to get on-board and save the earth.  To do that, laws must be implemented and we must be prepared to give up certain freedoms for the sake of saving the earth.

Proponents of this feel comfortable enough now to come out in the open with such ideas because they feel they have the media, academia, the U.N. and the global green movement on their side.

As this program moved along, Jim had Gary explain the following:

Crosstalk listeners also present their views to finish the program.