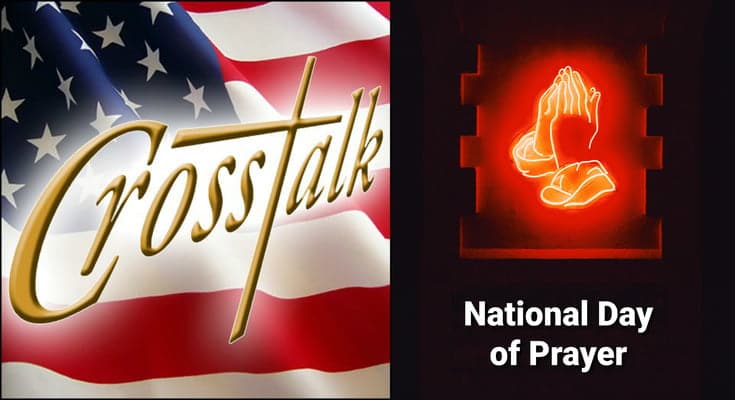 Here’s a selection of “Round-Up” news stories Jim featured on this National Day of Prayer:

–North Korea responded to remarks made by President Biden last week when he indicated that the nuclear programs of North Korea and Iran present serious threats to the security of America and the world.

–U.S. military forces in Iraq were recently targeted for the first time by Iranian drones.

–China is ramping up efforts to arrange trade deals with Middle East nations in order to peacefully collapse Western-American dominance in the region.

–China’s leader, Xi Jinping, personally directed the communist regime to focus its efforts to control the global internet, displacing the influential role of the U.S.

–China wants a polar “silk road” that would create a new shipping route linking Asia and Europe via the Arctic as part of their “Belt and Road Initiative”.

–The Chinese government is taking further steps to remove religious material from the hands of Christians.

–President Joe Biden is cultivating leadership that bears a stark resemblance to FDR, especially as it pertains to changing the structure of the U.S. Supreme Court.

–President Biden has been accused of manipulating the results of the 2020 census   for political gain.

–House Republicans could vote to remove Conference Chairwoman Liz Cheney as soon as next week.

–The Biden Administration’s Department of Defense has denied a parking permit to AmVets to stage a rallying point at the Pentagon.

–A juror in the Derek Chauvin trial has not only misled the court about his knowledge of the death of George Floyd, but also lied on the questionnaire that jurors must answer before the trial.

–Former Microsoft CEO Bill Gates said in a tweet that after 27 years, he and his wife are getting a divorce.

–The Department of Homeland Security is considering working with outside firms to surveil “extremist” language by Americans online.

–Senator Chuck Schumer is quietly considering trying to use a fast-track budget maneuver to legalize millions of undocumented immigrants should bipartisan talk on providing a pathway to citizenship fall apart.

Crosstalk listeners joined in with their comments to wrap up the broadcast.