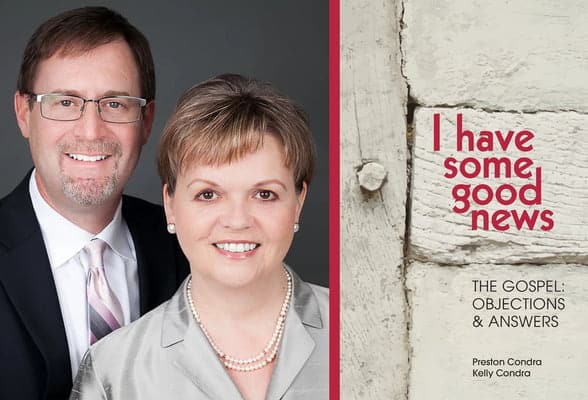 Our world is filled with bad news.  There’s the ongoing crisis in the Middle East.  We see the rise of China’s influence, Russia flexing its muscles and concerns over North Korea.

Here in the U.S., crime and violence are rampant.  People are being pitted against one another based upon skin color.  Sin is running rampant as our nation bends and bows to the agenda of Sodom and Gomorrah.  Every day the cries of unborn babies are silenced at the hands of abortionists.  We are literally falling apart at the seams.

In the midst of all this there is good news.  In fact, it’s the greatest good news of all time.

Joining Jim to explain this good news was Preston Condra.  Preston is a graduate of Oklahoma Baptist University and Southwestern Baptist Theological Seminary.  He served as an associate pastor for 10 years then joined the apologetics ministry, Watchman Fellowship.  He has preached in churches and conferences across the United States and has served as an adjunct professor.  He along with his wife Kelly, who is a Christian college professor, have co-authored six books and founded Sufficient Word Ministries, a teaching and equipping ministry that conducts church-hosted evangelism and discipleship seminars.

Is there a difference between being religious and being a Christian?  According to Preston, being a Christian is defined by believing the Gospel for the purpose of salvation.  That is found in 1 Corinthians 15 where in verses 1-4, Paul tells readers that this is the Gospel by which you’re saved.  Paul goes on to note in  verses 3-4 that Christ died for our sins according to the Scriptures, he was buried and on the 3rd day rose from the dead.  Whoever believes that and only that will have (as Romans 1:16 says) the power of God unto salvation.

Doesn’t going to church account for something?  Kelly noted that after salvation, God does want us to assemble together as believers.  However, Christianity is a spiritual birth (the new birth-being born from above).  It’s a connection that comes between the person who believes the Gospel and the Lord.  They are no longer dead (separated from God) in trespasses and sins.  They are now spiritually alive and going to church does not make a person spiritually alive.  Believing the Gospel does that.

As this broadcast moved along, the discussion looked at what sets Jesus apart from other religious leaders.  After that, some false notions and objections to the Gospel were covered such as:

What is the Gospel?  Why do people need it?  How can that need be met?  Find out when you review this vital edition of Crosstalk.

1 copy of I Have Some Good News is available for a donation of $14.