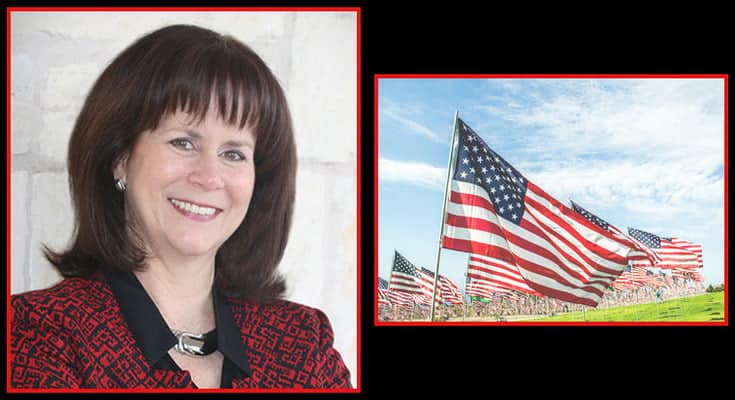 This day was designated as Flag Day in 1916 by President Woodrow Wilson.  He urged the observation of this day to express our love of America and our understanding of this great mission of liberty and justice.

Unfortunately today the flag is under attack.  It is scorned, burned and trampled upon.  Others create flags to try to compete with it such as homosexual “pride” flags and the Black Lives Matter flag.  Also under attack is the freedom that the stars and stripes represent.

Joining Jim to discuss this issue was Debbie Wuthnow.  Debbie is the president of iVoterGuide and iVoterGuide.com  She spent many years as a stay-at-home mom while organizing events for her church and community.

What kind of message does Debbie think is being portrayed by actions such as the one taken by Wisconsin to fly the homosexual “pride” flag above the state capitol?  One message for Debbie in regard to this is that elections matter.  The individuals making such decisions were elected and these decisions wouldn’t be made if we were voting for people who shared our biblical values.

How did we get to this point where some are disrespecting our flag and the principles for which it stands?  During the past several decades, the enemies of freedom, for every little gain they make, strive for more.  On the other hand, Debbie feels that Christians are staying in their churches and homes and not being as aware of what’s going on, yet they have opened their eyes and are seeing that we’re losing our nation.  So overall it’s because we’ve disengaged, while the other side, which is a small minority, has been very vocal and has been successful in canceling those who have a traditional voice.

As this broadcast progressed, Jim had Debbie address the following:

There’s much more to take in, and listeners presented their questions as well, on this edition of Crosstalk.