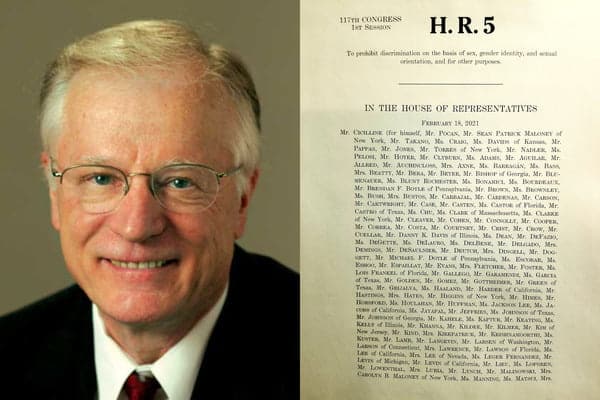 The so-called Equality Act is a top priority item in the Biden Administration.  In the House it is H.R.5 and passed February 25th on a vote of 224-206.  All 221 Democrats voted in favor of the legislation, none voted against it.  As to Republicans, 206 voted in opposition. 3 voted in favor; that’s Congressmen Fitzpatrick, Katko & Reed. So HR 5 has been sent to the Senate.

Incidentally the Senate on February 23rd introduced their own bill by the same name, ‘Equality Act’ (S.393).  So whether the Senate takes up H.R. 5 from the House or S393, the devastating consequences remain the same.

Indeed, the church and Christianity are in the cross-hairs of this legislation.  In addition to the church being impacted, this legislation will also impact every business across the nation.  Girls sports as we know them will be obliterated. Privacy will be breached.  Also, shelters for battered women, whose residents have been abused by men, will now be required to house men who identify as women.  The consequences don’t end there, but will have only just begun.

Joining Jim to discuss this issue was Dr. Erwin Lutzer.  Dr. Lutzer is the Pastor Emeritus of The Moody Church where he served as the senior pastor for 36 years.  He’s the speaker on radio programs such as Running to Win and Songs in the Night.  He’s the author of numerous books including the recently released, We Will Not be Silenced.

Some Christians will look at a verse such as Galatians 3:28, which communicates that we are all one in Christ Jesus, and proclaim that the verse promotes equality.  So as Jim asked, ‘How could you possibly be opposed to equality Dr. Lutzer?’

Dr. Lutzer responded by noting that there probably isn’t a word in our culture that’s as misused as the word ‘equality’.  While all are created equal in terms of value, not all actions are equal.  So you can’t take the word ‘equality’ like an elastic band and stretch it to make it whatever you want it to be.

In the end, Dr. Lutzer sees the so-called ‘Equality Act’ as the greatest threat to the Christian faith and America and a recipe toward greater inequality.

Will this legislation impact the Religious Freedom Restoration Act?  Is there a tie-in to Marxism?  The answer on both counts is ‘yes’.  Find out how and why when you review this important edition of Crosstalk.

More Information
The book, We Will Not Be Silenced, has 280 dynamic pages.  It’s a must read if you really want to know where we are in society today and how we got here.  It is truly a wake-up call.  The book was released last Fall and is available from the VCY Bookstore at 23% off the regular price. Go to vcy.com or call 1-888-722-4829.