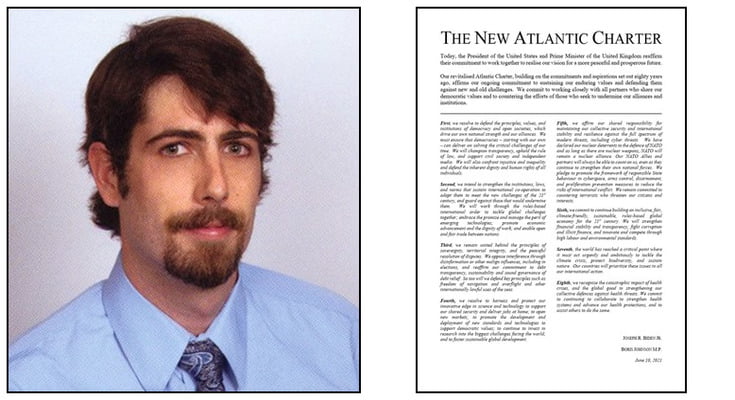 The push for a globalist order has been going on for a long time.  However, it was a shock to many when on September 11, 1990, President George Herbert Walker Bush gave a speech before a joint session of Congress touting just such an order.

Systematically over time, this kind of world order has been taking place.  For example, George W. Bush pushed for a North American union which fell apart after being exposed.  Eventually Donald Trump came along and was a roadblock to this effort.  However, with him out of office, the quest continues.

The latest step toward that end occurred on June 10th of this year when President Joe Biden and Boris Johnson, Prime Minister of the U.K., agreed to a document called, The New Atlantic Charter.

Joining Jim for discussion on this matter was Alex Newman.  Alex is an award-winning international freelance journalist, author, researcher, educator and consultant.  He is a foreign correspondent and regular contributor for The New American and contributes to other publications as well. Alex has authored or co-authored several books such as Crimes of the Educators and Deep State: The Invisible Government Behind the Scenes.  He’s the founder of Liberty Sentinel.

According to Alex, there’s an agenda to bring the U.S. and Europe together under a Trans-Atlantic union.  This idea goes back to at least the 1940’s but there was a large obstacle in the way.  The nations of Europe didn’t want to participate for fear of not having a voice in that kind of entity.

So it was the policy of our State Department, and those who created the Marshall Plan, to try and bring Europe under one regional government which today is known as the European Union.  Key people at the State Department testify that the reason for this was to serve as a precursor to an eventual merger of the E.U. with the U.S.  Alex believes this new Atlantic charter breathes new life into the idea.

Is this agreement constitutional?  What are the military implications?  What does the charter mean by “global good”?  How does this charter treat the idea of national sovereignty?  These are just a handful of questions that are answered on this edition of Crosstalk.