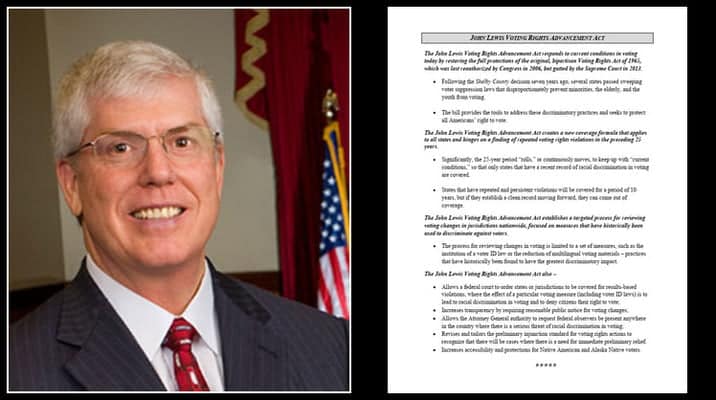 Despite being defeated on HR1, S1 and S2093, the attempts by the federal government to take over elections is intensifying with yet another piece of legislation known as the John Lewis Voting Rights Advancement Act.

According to Mat Staver from Liberty Counsel, the tenets of this legislation are actually worse than what we’ve previously seen.

Mat Staver is the founder & chairman of Liberty Counsel.  Mat has over 300 published legal opinions and has authored eight scholarly law review publications.  He is host of Faith & Freedom and Freedom’s Call and has argued two landmark cases before the U.S. Supreme Court.

Before discussing the main topic, Jim had Mat comment on the following rulings that came down from the U.S. Supreme Court this morning:

The John Lewis Voting Rights Advancement Act failed and now Democrats want it back.  This is the Joe Manchin (Democrat from West Virginia) compromise but it’s anything but that.  Mat believes it’s actually worse than HR1/S1 because it would allow the content of those bills to come to pass and more.

This act provides for nationwide preclearance (prior approval).  This prior approval would come from the President Biden, Deep State, Department of Justice.  This means the DOJ would have complete control over every aspect of every election.  Since there’s a voting rights division within the DOJ and it’s dominated by pro-ACLU, pro-Southern Poverty Law Center, pro-La Raza and pro-Democrat policy individuals, do you think they can be trusted to provide an atmosphere of fairness in our elections?

There’s much more to hear on this issue, as well as discussion concerning the pressure being put on Supreme Court Justice Stephen Breyer to resign.  Hear it all, including feedback from listeners, when you review this edition of Crosstalk.