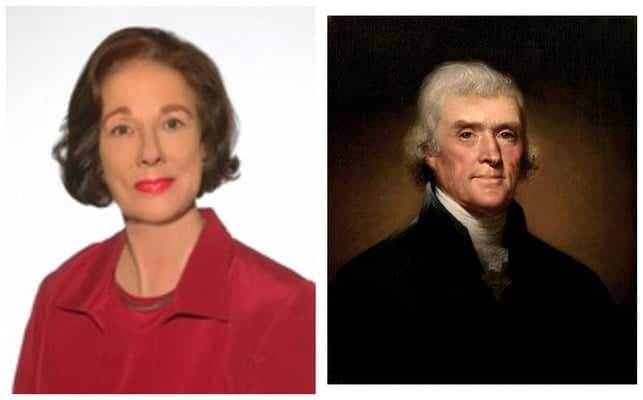 Some communist goals were written into the Congressional Record on January 10th, 1963.  Here are just a few:

This kind of revisionism is taking place today and one point of interest for those behind such efforts is founding father Thomas Jefferson.  Jefferson was the 3rd president of the United States and author of the Declaration of Independence

Joining Jim to separate truth from fiction concerning Jefferson was Dr. Catherine Millard.  Dr. Millard is president of Christian Heritage Ministries.  She has a Doctor of Ministry degree in the area of Christian Education.  She’s the recipient of the George Washington Honor Medal sponsored by the Freedoms Foundation at Valley Forge for excellence in patriotic and individual achievement and the Faith and Freedom Religious Heritage of America Award for significant contributions in affirming and strengthening the biblical principles in American life.  She’s the author of numerous books and has taught extensively on the subject in college, universities and schools throughout the nation and abroad. She’s author of Thomas Jefferson: Accuracy vs. Revisionism–An Expose.

According to Dr. Millard, attacks against Thomas Jefferson have been going on since the 1930’s when the Marxist movement began.  Why does he receive so much attention in this regard?  Dr. Millard believes it’s because he wrote the Declaration of Independence as well as the Statute for Religious Freedom in Virginia, documents that were the first of their kind in the world.  Such documents provided our nation with its civil and religious liberties and it’s his pen that stood up against the monarchy for the first time in world history.

What do we know about his early life?  What impact did Christianity and religion have on his life and writing?  How did Jefferson view the separation of church and state?  What do the Council on Foreign Relations and Karl Marx have to do with Jefferson?

As Dr. Millard addresses these and other questions, you’ll see how this information stacks up against the charge that Jefferson was an atheist, agnostic or unbeliever.

Crosstalk listeners were given an opportunity to present their questions and opinions as well.