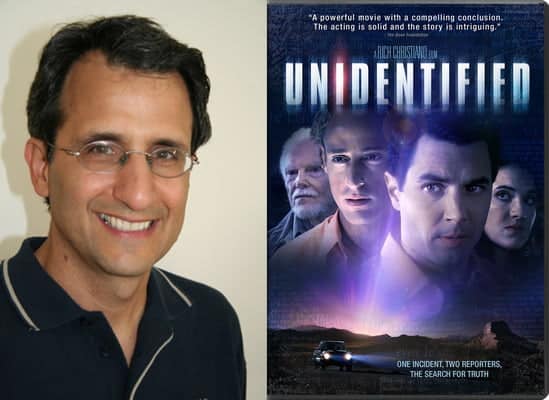 The American public has had a fascination with unidentified flying objects (UFO’s) for decades.  More recently, the buzz concerning UFO’s has greatly increased, with sightings going from joke to national security worry for our leaders in Washington, D.C.  For the Christian, this is a great opportunity for evangelism.

You may ask, “What makes the subject of UFO’s a great stepping stone for communication of the Gospel?”  Joining Jim with the answer was Rich Christiano.  Rich is a film writer, director, producer and distributor.  For decades, Rich has been involved in film production.  He’s the writer, director and producer of such films as The Appointment, Time Changer, The Secrets of Jonathan Sperry, A Matter of Faith, Play the Flute and the movie spotlighted here called, Unidentified.

Rich began by giving listeners a brief testimony.  This included some personal history of how he came to be a movie producer, as well as his film-making philosophy.

From there, Rich went on to describe what it was that compelled him, as a Christian, to address the issue of UFO’s in a film.  In the end, Rich sees Unidentified as the most evangelistic movie he’s done.  Jim proves the point as he plays audio clips from the movie, with Rich offering commentary of the kind that only the producer himself could provide.

Review this edition of Crosstalk and perhaps you’ll discover that Unidentified is the unique tool you’ve been looking for to reach certain people that the Lord has put on your heart.