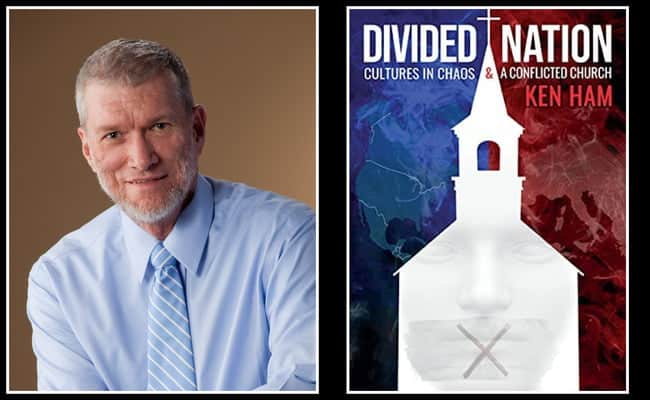 Today we are seeing great divisions in politics where bills are often the result of great party line splits.  Then there are the provocateurs that are causing great turmoil based upon the idea of skin color.  Neighbors are rising up against each other.  There’s a great divide within our educational institutions and also the church.

Why is this happening to the culture and the church?  As believers in Christ, how can we become engaged and be effective in erasing the division?

Tackling this critical issue was Ken Ham.  Ken is the president, CEO and founder of Answers in Genesis-US, the highly acclaimed Creation Museum, and the world-renowned Ark Encounter.  Ken is one of the most in-demand Christian speakers in North America and is author of numerous works including his latest book, Divided Nation: Cultures in Chaos & A Conflicted Church.

For years Ken, along with researchers like George Barna, have been communicating that we’ve been losing the younger generations from the church.  Ken in particular has been warning the church that if they don’t stand on God’s Word, teaching generations how to defend the Christian faith against the attacks of today, and that Genesis is the foundation to look to concerning marriage, gender, etc., we will continue to lose younger generations.  Absent the teachings of this foundation, the world will become increasingly secularized.  That will result in more antagonism toward Christianity.

So how does he believe we are to handle issues like gender or gay marriage?  Many people believe those are separate issues when actually they’re symptoms of a larger problem.  It’s the idea that people no longer build their thinking on God’s Word but instead look to man’s word.

When did this exodus from the truth begin?  Are people hungry for the truth?  How many generations does it take to lose a culture?  Are non-Christians really worldview-neutral or does the Bible say otherwise?  These and other questions are answered as Ken digs deep to reveal why America is so divided today.