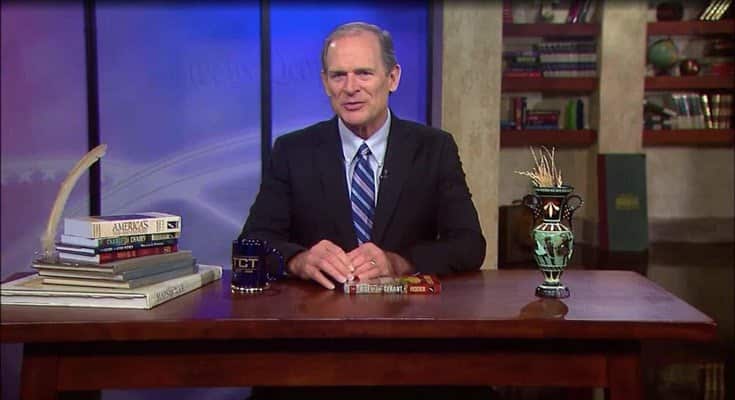 The Greek philosopher Plato predicted democracy would degenerate into anarchy once people lost their virtue.  Then a tyrant would arise.

How do democracies and republics get taken over?  Haven’t systems been put in place to prevent this from happening?

The best way to answer that is to look at history and perhaps no one tells it better than William J. Federer.  William is a nationally known speaker, historian, author, and president of Amerisearch, Inc, a publishing company dedicated to researching America’s noble heritage.  He’s the speaker on The American Minute daily broadcast.  He has authored numerous books including, America’s God and Country Encyclopedia of Quotations, Rise of the Tyrant, Who is the King in America? and Socialism: The Real History From Plato to the Present.

According to William, the first writing was Sumerian cuneiform on clay tablets from the Mesopotamian Valley (Iraq).  Moving on he noted Nimrod and the Tower of Babel, 2,000 years of Egyptian pharaohs, Nebuchadnezzar, Alexander the Great, Julius Caesar, Attila the Hun, etc.

His point?  Although the titles may differ such as Pharaoh, Caesar, Kaiser, Sultan, Czar, Chairman, etc, the most common form of government is the king where power gravitates into the hands of one person.  It’s the “default setting” for human government.

As centuries moved along these kings got bigger and bigger because of military and technological advancements.  Eventually the King of England became so big that people said the sun never set on the British empire.

Eventually America’s founders decided to break away, not just from the King of England, but from having a king as a leader.  They flipped the concept and made the people the king.

In the end, William views history as a long categorizing of how to limit the power of a king, but how do you do that, especially in the modern era when certain powerful individuals seemingly want to take away the rights of the people?  William believes that history isn’t prophetic, but it is predictive.  In other words, past behavior is the best indicator of future performance.  So join him as he answers this question by steering listeners through world history, on this edition of Crosstalk.

The LORD is with you, while ye be with him; and if ye seek him, he will be found of you; but if ye forsake him, he will forsake you.
2 Chronicles 15:2b