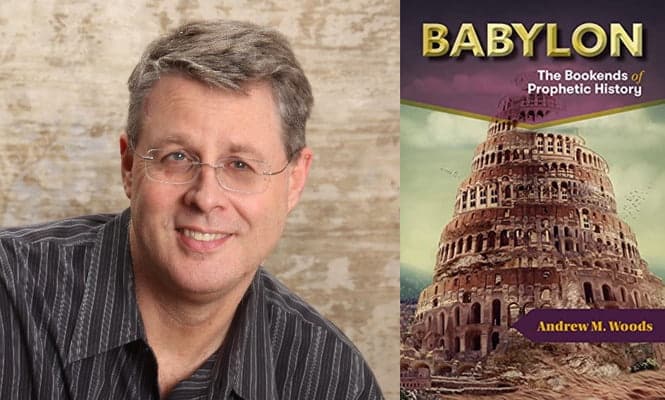 Babylon is repeatedly referenced in the Bible.  Daniel and his friends were taken captive to Babylon so we know it was a real place but does it have a future as well?  Are the scriptural references figurative?  Could they be literal meaning that it will be a future place where the anti-Christ will rule?

Taking a detailed look at this issue was Dr. Andy Woods.  Dr. Woods is the president of Chafer Theological Seminary and senior pastor of Sugar Land Bible Church.  He has contributed to numerous theological journals and Christian books and has spoken on a variety of topics at Christian conferences.  He’s author of The Middle East Meltdown, The Falling Away as well as other books.  He appeared with Jim to discuss, Babylon: The Bookends of Prophetic History.

In Zechariah, after Babylon fell to the Persians, it talks about a woman who’s put in a basket.  In the timing of God she’s let out to build a house (temple) and she builds it in the land of Shinar.

Is this an event that is still in the future for us or did this already take place?

First of all we need to look back to see when we’re first introduced to Babylon.  Babylon comes into the forefront when you get to Genesis 10 and 11. Chapter 11 in particular is where Shinar (Mesopotamia—modern day Iraq) is mentioned.  This is where the Tower of Babel project took shape and was man’s attempt at world government.

Dr. Woods believes that Satan has always wanted the Tower of Babel project back.  Revelation 17 and 18 indicates that he’ll get that wish only to be thwarted by the second coming of Christ.

Nimrod is also part of this discussion.  He’s mentioned in Genesis 10 and his name in Hebrew means “rebel” or “revolt”.  He orchestrated the Tower of Babel project. So Dr. Woods sees him as the ultimate pre-figurement of the coming anti-Christ since he was attempting to establish that which excludes a true knowledge of God in the land of Shinar.  That entire system will be reincarnated in the end times.

As the discussion moved along, the following points were covered:

This is an overview of just the first quarter hour of this broadcast that is jam-packed with information.  Have your pen/pencil, notebook and Bible handy as Dr. Woods takes you on a fascinating study on this edition of Crosstalk.

More Information
A copy of Babylon: The Bookends of Prophetic History, can be obtained for a donation of $16 or more.  Go to vcyamerica.org or you may call our switchboard at 1-800-729-9829.