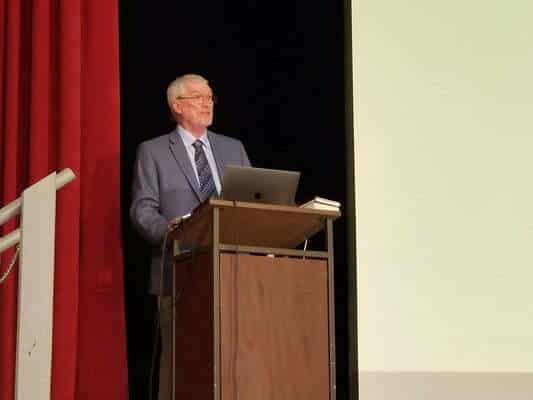 This edition of Crosstalk was a broadcast of a portion of a VCY rally from September of 2021.  The rally featured Ken Ham, CEO of Answers in Genesis, the highly acclaimed Creation Museum and the world-class Ark Encounter in northern Kentucky.

Ken explained how America was greatly impacted by the Bible.  Today, however, we’re seeing the consequences of the Bible being thrown out in numerous ways as the West becomes less Christian every day.

He was more specific as he noted how generations of kids have been told the Bible isn’t true, you throw God, the Bible and prayer out, and in the end there’s no absolute authority.  Under that scenario, who decides what’s right and what’s wrong?  Everyone does and that means everyone does what’s right in their own eyes.

The result is gay marriage, euthanasia, abortion, pedophilia, racism and genderism permeating the culture.  Even many in the church think these are different problems when in fact they are symptoms of the same problem.  It’s about those who build their thinking on man’s fallible word instead of God’s infallible Word.

Going back to how this began, Ken communicated that instead of looking at how bad the culture is, we should be looking at how bad the church is.  For example, in the UK, church attendance is down to 4%.  Then he quoted statistics for America from 2010.  He noted how of those born before 1928, 56% went to church.  32% of baby-boomers attended church, Generation-X came in at 27%, and 18% of millennials said they attend church.  The latest church attendance figures he had from 2018 indicates that millennials and those from Generation-Z are down to about 11%.

Is it any wonder that as our nation becomes more secularized and builds its thinking on man’s word that it’s becoming more antagonistic toward Christianity?

As the program progressed, Ken elaborated on the following:

Get the answers to these and other important questions when you review this timely and vital edition of Crosstalk.