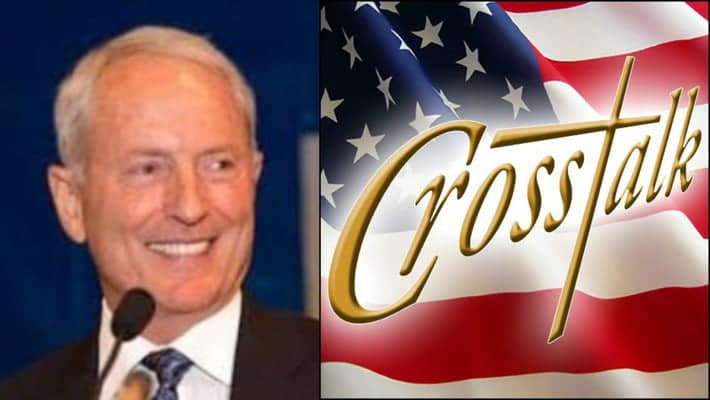 This week, President Biden will be meeting with Pope Francis.  This meeting is generating considerable controversy as Mr. Biden is an advocate of abortion, something the Catholic Church and the pope oppose.  However, what should create even greater discussion is how the teachings of Pope Francis contrast with the teachings of the Apostle Peter, the man considered by Catholics to be the first Pope.

Returning to Crosstalk to provide listeners with biblically-based answers was Mike Gendron.  Mike is the founder and director of Proclaiming the Gospel Ministry.  Mike was a devout Roman Catholic for over 3 decades and was taught to rely upon the authority of the church above all else.  Mike searched the Scriptures and was amazed to find that what he read in Scripture contradicted the teaching and tradition of the church he had been a part of for so long.  He trusted Jesus as his Savior and now the Bible has become his sole authority in all matters of faith.  Mike is the author of the books, Preparing for Eternity and Contending for the Gospel and has produced numerous videos with warnings concerning false teachings vs. the truth of the Scriptures.

Mike noted that there is a conservative wing of the Catholic Church that opposes Pope Francis and his unwillingness to forbid President Biden from receiving communion due to the president’s support for abortion and LGBTQ rights.

Jim also noted another inconsistency surrounding President Biden and his Catholic faith.  It surrounds the pope’s appointment of Jeffrey Sachs, an abortion advocate and population control activist, as an ordinary member of the Pontifical Academy of Social Sciences.

Mike added that the pope met with House Speaker Nancy Pelosi.  Her position on abortion is the same as that of President Biden.  Unfortunately, the pope never addressed that issue with her, nor did he encourage the bishops to deny her communion.

Yet in all this hypocrisy, there’s an even bigger dilemma.  Who are Catholics going to follow?

Mike began answering that by dealing with the issue of reverence and how this is handled by the Catechism of the Catholic Church.  It tells readers that the Roman pontiff enjoys infallibility as supreme pastor and teacher of all the faithful.  He also proclaims infallibility whenever he gives a definitive act or doctrine pertaining to faith or morals.

The definitions pronounced by the pope must be adhered to with the obedience of faith.  This means Roman Catholics have a dilemma.  Should they trust the man they’re told was their first pope (Peter) or should they trust the current pope.  After all, each of these individuals disagree on major issues of the Christian faith.

According to Peter’s own words, he wasn’t a pope but rather a fellow elder who submitted to Jesus as the head of the Church (1 Peter 5:1), while also teaching that Jesus was the shepherd and guardian of souls (1 Peter 2:25).  On the other hand, Pope Francis believes he’s the vicar of Christ and the head of the Church with supreme and universal power which is exercised unhindered by him.

Does the Bible mention the papacy?  How can two popes, whose teachings are considered infallible, contradict each other?  Was Peter really infallible?  What does this mean for those trying to adhere to the Catholic faith?

Mike brought much clarity to this issue and listeners contributed their questions and comments to the broadcast as well.

To obtain the DVD Hard Questions for Good Catholics and the tract Have You Ever Been Deceived at a reduced price, go to proclaimingthegospel.org or call 817-379-5300.