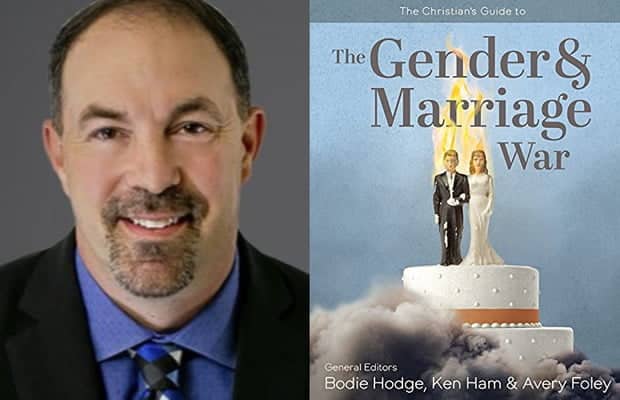 Regular listeners to Crosstalk know we are in a war; a war between a biblical worldview and a secular worldview.  It shows up in areas such as creation vs. evolution, life vs. killing the unborn, global governance vs. national sovereignty, and more.

This is the result of many in society abandoning the authority of God’s Word and instead asking the question: Did God really say that?

To help equip students, parents, Christian leaders, pastors and others to uphold the truths of Scripture on these critical issues, Jim welcomed Bodie Hodge.  Bodie is a speaker author and researcher at Answers in Genesis and a member of the Editorial Review Board.  He’s been involved with many books and DVD’s and is a regular speaker in the Creation Museum Speaker Series. He’s the author, co-author or editor of numerous books including being co-editor of a book discussed on this broadcast, The Gender & Marriage War.

When did this war begin?  Bodie noted that it began with sin but he suggested that moving ahead to the 1960’s and ’70’s is when, “…the modern gender and marriage war really started to take place.”

He went on to describe how in the late 1700’s/early 1800’s a big shift was taking place in the West.  When looking at various subjects, people began rejecting God’s Word.  One of those was creation.  People began to embrace man’s ideas concerning things like long ages for the earth as well as the attacks from higher criticism that began to unfold.

Eventually we had the Scopes Trial in 1925 and before long the Bible and prayer began to be removed from schools.

What was next?  The sexual revolution.  It was a time when people began living out the “fruit” of that worldview that rejected God and His Word.  In fact, in his book, Bodie uses the phrase “sexual humanism” to describe what was beginning to take shape.

Bodie then backed up to describe where this comes from.  He explained how there are really only two religions: God’s and not God’s.  If it doesn’t come from God, it comes from the mind of man.  That’s humanism.  This includes atheism, Hinduism, Islam and even sexual humanism.  All these and many more are part of a humanistic worldview.

Sexual humanism is a subset of the secular forms of humanism where things are defined by sex.  It’s just one form of secular humanism that is dominating much of the West where people have rejected God and elevated man.

As this program moved along, Jim had Bodie answer numerous questions.  Here are several from the first quarter hour:

Learn how to biblically discern what’s taking place amidst the gender and marriage war when you review this edition of Crosstalk.