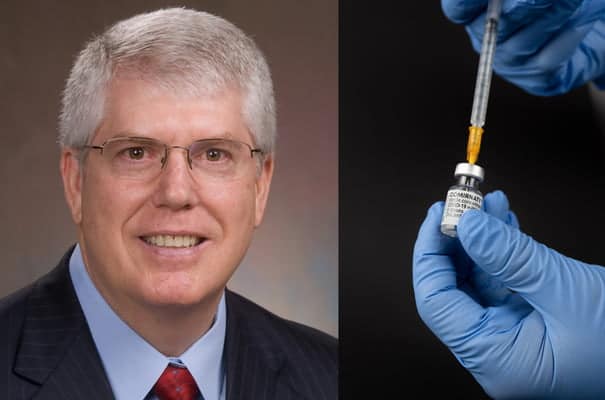 In a time of great need, critical care workers, public safety personnel, federal employees, civilian contractors, border patrol agents, military personnel, and others have one thing in common.  They stand to lose benefits, jobs and careers by not complying with COVID vaccine mandates while at the same time, religious exemptions for many have been tossed aside.

Appearing once again to bring listeners an update on this situation, Crosstalk welcomed Mat Staver.  Mat is the founder & chairman of Liberty Counsel.

Mat is on the front lines of this battle and as such, he sees it as an all-out assault against students, employees, religious employers, as well as men and women in the military.  Now this also includes those seeking medical treatment as Mat reported there are people being removed from kidney transplant lists if they don’t get the vaccines, and it doesn’t matter whether they’re a donor or a recipient.

Mat explained that these vaccines cannot be mandatory while under the category of emergency use authorization (EUA).  Since they’re under this authorization and because there’s no long-term data providing information concerning safety or effectiveness, then federal law says they can’t be mandated.  Every person then has the option to accept or reject the shot with no consequences.

Also, there’s only one FDA approved COVID shot.  That’s BioNTech’s Comirnaty shot.  However, the FDA, the CDC, the National Institutes of Health, and even Pfizer all have said it’s not available.  In fact, Pfizer has a statement reprinted on the CDC and NIH websites saying it’s not available and they don’t intent to produce it for months while the EUA is still on the market.

What about the argument that it’s the same thing?  It’s not because it’s legally distinct.  The FDA makes this clear.  This means it has certain requirements it has to meet regardless of the contents, even if chemically it’s identical.  Some of this involves the number it goes by.  This number requires certain criteria that the company has to legally comply with that doesn’t apply to EUA compliance.  So no, Comirnaty isn’t the same, that’s why it’s not available and why everything is under EUA at this time.

When or if the EUA’s are lifted, can the vaccines be mandated at that time?  Mat explained that this still cannot happen because you have other laws.  For example you have the federal Title VII laws for employees that protects them based upon religion where they can provide an exemption request to their employer.  For service members there’s the Religious Freedom Restoration Act.  In this case, if there’s any substantial burden on a person’s religious exercise, the government has to show a compelling interest of the highest order and achieve it in the means that’s the least restrictive.

As you can see, this issue has many legal twists and turns that need to be considered.  Mat is on top of it all and explains it in a way everyone can understand.  This includes news concerning a class action lawsuit representing all branches of the military.  Hear about that and more, as well as how listeners responded, by reviewing this important edition of Crosstalk.