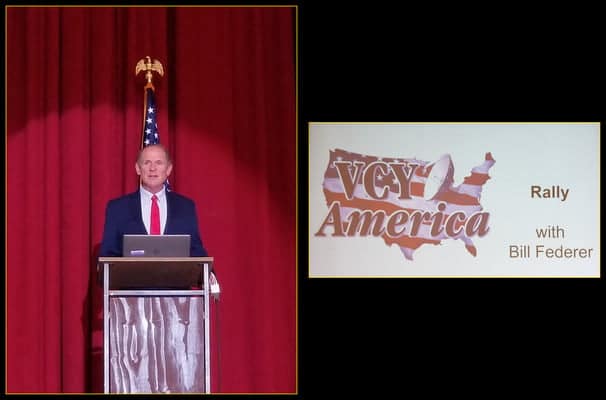 On March 5th, 2022 VCY America hosted a rally featuring Bill Federer titled “The Dangerous Slide Toward Socialism”.  William is a nationally known speaker, author and president of Amerisearch, Inc., a publishing company dedicated to researching America’s noble heritage.  He’s authored numerous books including, America’s God and Country Encyclopedia of Quotations, The Original 13: History of Religion in America’s First Thirteen States, Who is the King in America? and For God and Country: A Handbook for the Statesman-Citizen.

So have you ever known someone who lost their memory?  Bill believes America sort of has national Alzheimer’s.  We are the most free nation earth has ever seen and we’ve forgotten how we got here and who we are.  So he feels that when he presents history it’s like giving the memory back to someone who’s lost it.

Bill’s book, The Dangerous Slide Toward Socialism begins with Plato.  Why Plato?  He wrote about Atlantis, a highly structured civilization on an island that sank into the sea.  He saw them as the ideal structured society and democracy as an unstructured society.  So he’s the first person to talk about everyone owning everything in common.

Sounds good, right?  The problem is, eventually you realize that someone has to be in a position of government to hand out all the “common” stuff.  Those people will always be tempted to slip something extra to their family and friends and hold back from people they don’t like.  Before long it gets discretionary and the saying that he who holds the purse strings has the power has now come true.

Every attempt at having everyone owning everything equally always ends up in a deep-state bureaucracy run by the most corrupt person at the top…a dictator.

Interestingly, in 380BC, Plato said that if someone was born that truly had virtue, the world would crucify him.

This is just a small portion dealing with Bill’s description of the four stages of a nation as it pertains to the historic trend toward socialism.  Bill gets into so much more.  You can hear it by reviewing what we were able to present on this edition of Crosstalk or by ordering a CD or DVD copy of the entire rally.

More Information
Request your DVD copy of The Dangerous Slide Toward Socialism by calling 1-800-729-9829.  The DVD of the rally includes Bill’s entire presentation and PowerPoints.  Audio CD copies are also available.