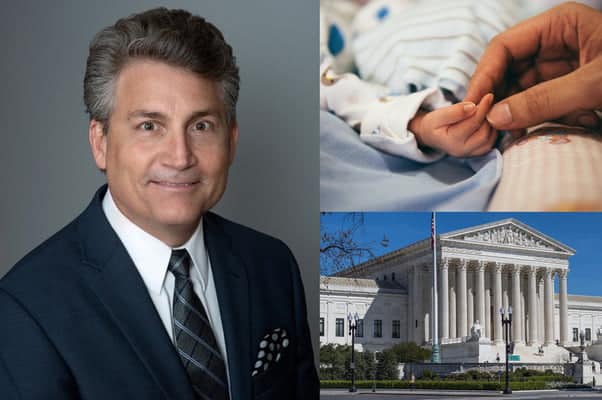 The numbers are hard to fathom, but it’s being reported that since the Roe v Wade Supreme Court decision in 1973, there have been over 63.7 million abortions.  That’s more than 63.7 million babies who received a death sentence for the simple fact that they existed.  We cannot forget what God told Jeremiah as recorded in Jeremiah 1:5, “Before I formed thee in the belly I knew thee; and before thou camest forth out of the womb I sanctified thee, and I ordained thee a prophet unto the nations.”  And yet in defiance against our Creator, 7 of the 9 sitting justices on the Supreme Court in 1973 invented a right to take the life of another innocent human being without a penalty.

The tide is turning in our nation and very soon we are awaiting another decision of the U.S. Supreme Court that could undo the wrong that has been going on for nearly 50 years.

On December 1, The U.S. Supreme Court heard oral arguments in what was called the biggest abortion case since Roe v. Wade.  That case is  Dobbs v. Jackson Women’s Health Organization.  This was legislation passed in Mississippi in a bipartisan fashion that would end abortion once the unborn child reached the age of 15 weeks in the womb.  This conflicts with the Casey and Roe decisions.

An appellate court deemed it unconstitutional but the Supreme Court decided to hear this case.  According to Brad, this was a clear indication that they had something else to say about this law.  As Brad listened to the oral arguments in December, he became confident that he’d see the court uphold this law.  In fact, he’s cautiously optimistic that this could be used to overturn Roe.

Brad’s optimism is based upon Supreme Court Justice Brett Kavanaugh who came prepared for the oral arguments with a list of decisions from that court that had been reversed.  Brad also heard encouraging comments from Justices Gorsuch and Barrett.  So he thinks they’d have a majority even without the Chief Justice, although Brad thinks he’d probably join the majority so that he could assign whoever would be writing the majority opinion.  So in the end, Brad believes this could be a 6-3 decision supporting the legislation.

If the court ends Roe, will that actually end all abortions in America?  What effect could the Texas heartbeat law be having on the future of Roe?  What happened as a result of the Kentucky legislature’s override of their governor that stopped abortions after 15 weeks?  What is the Faces of Roe radio special all about and when can you hear it?  These and other abortion-related points are discussed on this edition of Crosstalk.