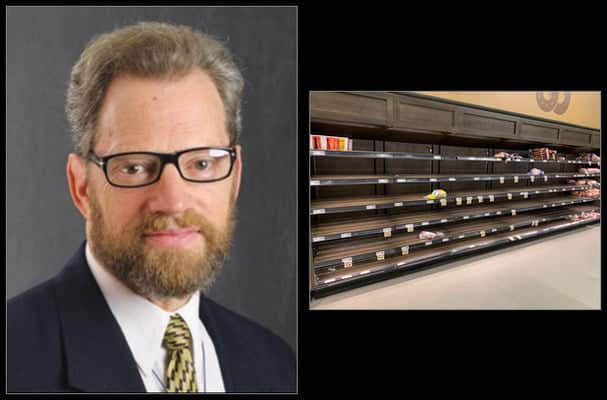 Jim began by noting that according to Tom DeWeese at the American Policy Center, On March 24th, after the G7 meeting in Brussels, President Biden announced that the food shortages around the world would be real because of the Ukraine war.  Interestingly, in the last 5 months, 20 food and fertilizer plants and storage facilities across the U.S. have been destroyed by fire.

Breitbart reported that the prices of U.S. farm products continued to rise in March reflecting the inflationary pressures gripping our economy and fears that the war in Ukraine and sanctions on Russia could lead to food shortages around the world.

Joining Jim to examine what’s behind all of this was William F. Jasper.  He’s senior editor at The New American Magazine.  He’s an author, journalist and commentator as well as a top investigative reporter and documentary producer.  For more than three decades he served as an accredited correspondent at the United Nations in New York and UN summits around the world.

William believes that famine in America is a real possibility due to the vulnerabilities in our food chain.  In fact, in an article he wrote on this, he dealt with over a dozen different issues that are coming together in what he described as a “seemingly perfect storm,” to potentially bring famine to the developed world and even the U.S.

In his article he puts much of the blame for the human desolation of famine on the  shoulders of the World Health Organization (WHO).  He indicated that if you look at the COVID lock-downs and mandates that began in 2020, we saw unprecedented, stringent, communist-style controls on the entire economy.  Many within the WHO admitted that this would cause famine all over the world.  In fact, they felt more people would die from the lock-downs and mandates than from the disease itself.

What the lock-downs and mandates specifically did was to disrupt the planting and harvesting cycles along with the transportation of food, fertilizer and fuel.  All that has been compounded by the Russia/Ukraine war which has disrupted fuel deliveries all over the world.  That, in turn, has escalated the price of fuel, fertilizer, potash and nitrogen.

William contends that we haven’t seen the worst of it, so be sure to review this edition of Crosstalk as he looks at the following:

There’s more to hear and listeners brought their thoughts to the discussion as well.