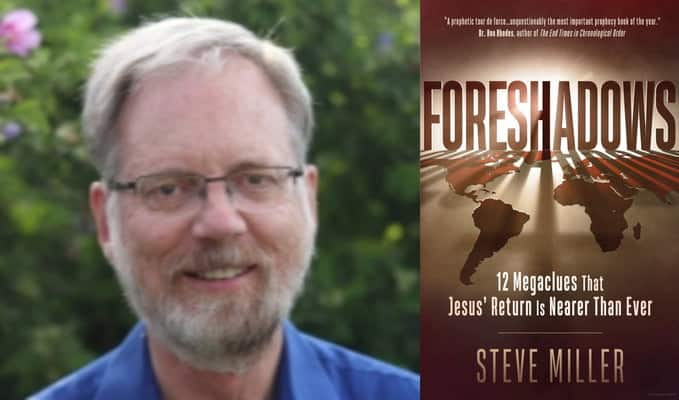 Steve Miller is a longtime editor of Bible prophecy resources and author of several books.  He’s a podcaster as well as a blogger.  This broadcast discusses his most current release, a very fascinating book, Foreshadows: 12 Megaclues that Jesus’ Return is Nearer Than Ever.

Steve explained that he used the term Foreshadows in the title because the book looks at trends indicating that we are drawing near to the end-times.  So while he believes we’re not currently in the end-times (that’s kicked off when the anti-christ offers Israel a 7 year peace treaty), the events that will take place during that time are casting their shadow into our day.

He uses the analogy of a wedding.  For example, he noted that a wedding doesn’t just happen spontaneously on the day it occurs.  A lot of preparation goes into making it happen.  So each activity that takes place prior to the wedding is a foreshadow of the wedding that’s yet to come.  In a similar sense, there are a lot of things that the Bible says will take place during the end-times before the return of Christ.

What’s different about today?  After all, people for many generations have anticipated the Lord’s return.  Unlike the past, today we’re seeing a great convergence.  As we look at what Scripture says will happen in the end-times, we’re not simply seeing a sign here or there, instead we’re seeing the horizon fill up with signs converging together, telling us we’re much closer to things like a one-world government, one-world economy, etc.

As the broadcast continued, Steve elaborated on the following points:

Foreshadows: 12 Megaclues That Jesus’ Return is Nearer Than Ever is newly released.  It retails for $17.99, however through June 30th, our bookstore is featuring this as one of their books of the month and has reduced the price.  It’s available at 60% off for just $7.20 plus any applicable tax and/or shipping.  This expires June 30th.  Go to vcy.com or call 1-888-722-4829.