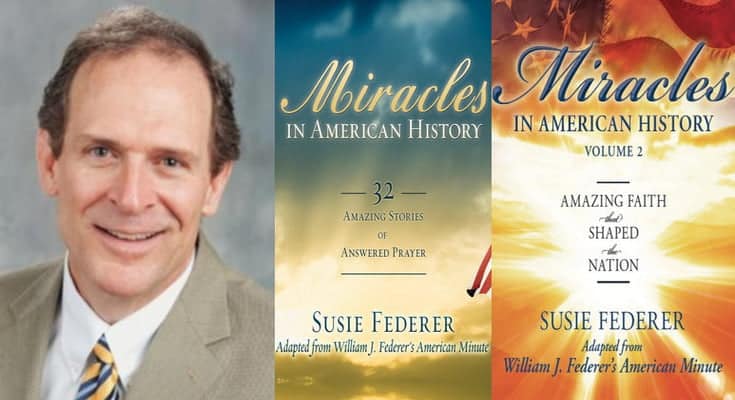 The amazing faith of many individuals helped to shape the development of our great nation.  Revivals happened at key times to bring Americans back to living for their beliefs in Christ so that God could use them to redirect the country.  These people were not perfect, but they obeyed God’s calling on their lives and believed that indeed they could forge ahead in God’s strength. America went through many crises, but God raised up leaders to bring her back under His will.

Recounting some of these stories was William Federer.  William is a nationally known speaker, historian, author, and president of Amerisearch, Inc, a publishing company dedicated to researching America’s noble heritage.  He’s authored numerous books including, ‘America’s God and Country Encyclopedia of Quotations’, ‘The Original 13: History of Religion in America’s First Thirteen States,’ ‘Who is the King in America?’ and more.  He’s the speaker on ‘The American Minute’ daily broadcast. He joined Jim to discuss a book his wife has released, ‘Miracles in American History Volume II.’

If there was ever a series of testimonials, not only of God’s existence, but God’s faithfulness, the stories in these volumes bear that out.  In regard to this latest edition, Volume 2, William presented the following:

In 1849, 150,000 Americans died of Cholera.  It originated in India and British steamships took it back to Europe where it killed many more.  Eventually it came to America at the time when Zachary Taylor was president. In response to this crisis, he declared a national day of fasting and prayer to be observed the first Thursday in August.

There were reports of people kneeling in the streets of Dayton, Ohio, as well as stores closing with people praying.  The result was that by the end of August, the death rates had dropped off.

This is just one example of wise action taken by America as a nation and how God responded in His love and grace.

–George Whitefield and the ‘Great Awakening’ revival in America.

–The second ‘Great Awakening’ starting in the woods of Kentucky and how this led to the founding of colleges, universities and a student revival at Yale.

–The founding of the YMCA and the Salvation Army…