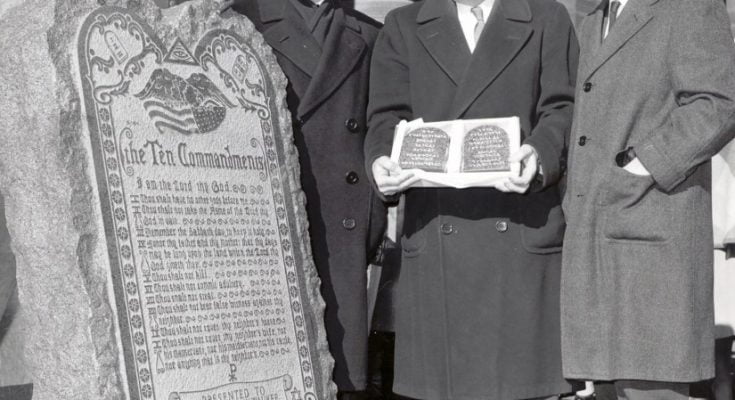 In spite of this close relationship between Aaron and the LORD, Aaron leads the people in breaking the law – specifically the Second Commandment that was still fresh in their hearing – and personally making (32:4) a molten calf, declaring them to be the gods of Israel.

Exodus 32:22-24 – In the 1956 film The Ten Commandments, Aaron is portrayed squeamishly saying “The people made me do it.” (While the movie inspired the Fraternal Order of Eagles to present a monument of the Ten Commandments to the City of Milwaukee that was placed at the Zeidler Municipal Building in 1957, and dedicated with Yul Brynner, who played Ramses in the movie, the movie has several Biblical inaccuracies as well as the fact that ABR identifies the Pharaoh of the Exodus as Amenhotep II, not Ramses. That’s why we should go to our Bibles and not to Hollywood for the truth!)

Exodus 32:28 – A casual reader would wonder why God would be so angry to kill 3,000 people. But having looked at the context we saw earlier, the people had entered a blood covenant with the LORD to obey His command against idolatry.

Exodus 32:32 – compare to Paul in Romans 9:3. Moses and Paul loved their people; they were willing to go to hell for their people.

Matthew 27:1 – We have a formal trial of Jesus (in contrast to the illegal night examination of Jesus) when it was morning. They found Him guilty and delivered Him to Pilate for sentencing (v.2). However, under the Mishna this was illegal – capital cases cannot be done at night, nor finish on the same day for conviction.

Proverbs 8:35, 36 – Unlike the synonymous parallelism of Psalm 33 – we see the use of contrasts. Find Wisdom, Find Life. Hate Wisdom, Love Death.

July 24 – What was the motives for the piety of the Judean Kings?

July 22 – The fulfilled prophecy of the Temple