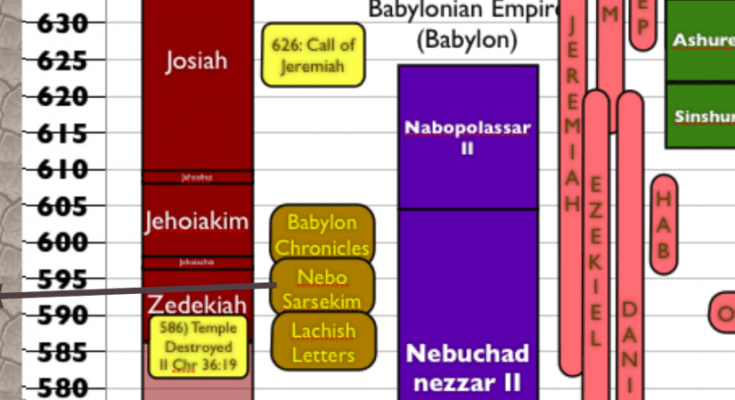 My apologies for going long here – but we are covering one of the most fascinating centuries in the Bible in one day! Buckle up and let’s go!

2 Chronicles 35:1 – Josiah kept the Passover. Why is this detail included? This and Hezekiah’s Passover (2 Chronicles 30:1) are the only two Passovers mentioned in 2 Chronicles. Keep in mind this is the 18th year of Josiah’s reign. The boy King is now 26 years old. It has been 20 years since Manasseh presumably held a Passover, and 75 years since Hezekiah held a great Passover. The Post-Exilic people who have returned to the land will have held the first official Passover in the land in over 70 years as well. Though we stray from the LORD, the LORD will hear us when we call to Him!

2 Chronicles 35:3 – For those who are curious where the Ark is today, another mystery is where was the Ark before Josiah moved it back into the Temple?

2 Chronicles 35:25 – Why did Jeremiah weep? Because in less than twenty five years the Southern Kingdom of Judah would be no more. The next chapter will go quickly through many names. But add up the dates – within one generation Josiah’s great Kingdom will collapse.

Interesting that Pharaoh changes the name from El-iakim to Jeho-iakim. The prefix changes from El (generic name for a god, in the KJV as God), to Jeho (short for Jehovah, in the KJV as LORD, the personal name of God. Especially interesting because he did evil in the sight of the LORD). And Eliakim’s son Jehoiachin shortly joins his dad in a Babylonian captivity with more temple vessels (2 Chronicles 36:10).

2 Chronicles 36:11 – Zedekiah, Josiah’s grandson by Eliakim, rejected Jeremiah’s warnings. Zedekiah also imprisoned Jeremiah in the jail in the king’s house (Jeremiah 32:2), because the king would not repent and wanted to “shoot the messenger.”

When Nebuchadnezzar appointed Zedekiah vassal-king of Judah, he would naturally make him swear fealty to himself by the God of his fathers. The fact is not specially recorded in Kings; but the prophet Ezekiel makes it the point of a prophecy against the king and his grandees (Ezekiel 17:11-21; comp, especially 2Chronicles 36:17, “mine oath that he hath despised.”

2 Chronicles 36:19 – Four hundred years of the Temple – and now it comes to an end. Just 19 chapters earlier we read how God threatened to destroy Solomon’s offering, the Temple, and make it a byword (2 Chronicles 7:20). Now it has happened.

2 Chronicles 36:21 – Depending on how you count, the Sabbath of the land had only been royally observed four times since Samuel anointed Saul as King. The laws each King had to copy (Deuteronomy 17:18) included the command to give the land the seventh year off (Leviticus 25:1-7), and specific punishment of exile if they did not (Leviticus 26:34-35). But how many kings went to prove the promised miracle of triple-abundance (Leviticus 25:21)? Most commentators simply say 70 years of rest * 7 = 490 years. However, the year of Jubilee was a second year of rest. Thus we would go back 442 years from the destruction of Jerusalem in 586 BC to 1028 BC. Subtracting 1028 BC from 1050 BC (Anointing of Saul) – would imply that the Sabbath of the Land had been kept only 3 or 4 times from when Samuel anointed Saul and passed the duty to keep the Sabbath onto the King, until when Zedekiah was on the throne when the temple was burned. And 70 years pass with the period at the end of verse 21.

2 Chronicles 36:23 – The book of 2 Chronicles ends at the start of Ezra. Compare 2 Chronicles 36:22-23 with Ezra 1:1-3. The people are returning to build again the House that was burned. The House was defiled by Jewish Kings, burned by Babylonian Kings, but will be rebuilt by a Persian King! The Priests will need to organize themselves, but we read already how Josiah had to do that as well (2 Chronicles 35:2). They will need to keep a Passover that hadn’t been kept in a hundred years, but this wasn’t the first long gap between Passovers. God allowed bad foreign policy to end the life of good King Josiah and hasten the destruction of the temple by pagan kings, but now God commanded a pagan king to fund the reconstruction of the temple!

1 Corinthians 1:7 – We too are waiting for the coming of our Lord Jesus Christ! What if it were today?