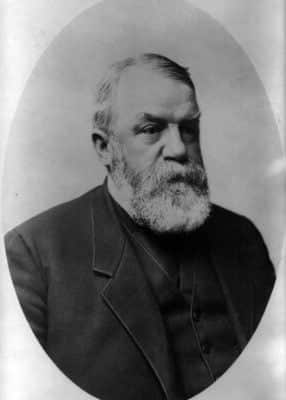 Now let us come to the part I want to dwell upon: “Forgive us our trespasses, as we forgive them that trespass against us.” This is the only part of the prayer that Christ explained.

Notice that when you go into the door of God’s kingdom, you go in through the door of forgiveness. I never knew of a man getting a blessing in his own soul, if he was not willing to forgive others, If we are unwilling to forgive others, God cannot forgive us, I do not know how language could be more plain than it is in these words of our Lord. I firmly believe a great many prayers are not answered because we are not willing to forgive some one. Let your mind go back over the past, and through the circle of your acquaintance; are there any against whom you are cherishing hard feelings? Is there any root of bitterness springing up against some one who has perhaps injured you? It may be that for months or years you have been nursing this unforgiving spirit;how can you ask God to forgive you? If I am not willing to forgive those who may have committed some single offence against me, what a mean, contemptible thing it would be for me to ask God to forgive the ten thousand sins of which I have been guilty!

But Christ goes still further. He says: “If thou bring thy gift to the altar, and there rememberest that thy brother hath aught against thee; leave there thy gift before the altar, and go thy way; first be reconciled to thy brother, and then come and offer thy gift.” It may be that you are saying: “I do not know that I have anything against any one.” Has any one anything against you? Is there some one who thinks you have done them wrong? Perhaps you have not; but it may be they think you have. I will tell you what I would do before I go to sleep to-night; I would go and see them, and have the question settled. You will find that you will be greatly blessed in the very act.

Supposing you are in the right and they are in the wrong; you may win your brother or sister. May God root out of all our hearts this unforgiving spirit.

A gentleman came to me some time ago, and wanted me to talk to his wife about her soul . That woman seemed as anxious as any person I ever met, and I thought it would not take long to lead her into the light; but it seemed that the longer I talked with her, the more her darkness increased . I went to see her again the next day, and found her in still greater darkness of Boul . I thought there must be something in the way that I had not discovered, and I asked her to repeat with me this disciples’ prayer. I thought if she could say this prayer from the heart, the Lord would meet her in peace. I began to repeat it sentence after sentence, and she repeated it after me until I came to this petition: “Forgive us our trespasses, as we forgive them that trespass against us.” There she stopped . I repeated it the second time, and waited for her to say it after me; she said she could not do it. “What is the trouble?” She replied, “There is one woman I never will forgive.” “Oh,” I said, “I have got at your difficulty; it is no use my going on to pray, for your prayers will not go higher than my head. God says He will not forgive you unless you forgive others. If you do not forgive this woman, God will never forgive you. That is the decree of heaven.” She said, “Do you mean to say that I cannot be forgiven until I have forgiven her?” “No, I do not say it; the Lord says it, and that is far better authority.” Said she, “Then I will never be forgiven.” I left the house without having made any impression on her. A few years after, I heard that this woman was in an asylum for the insane. I believe this spirit of unforgiveness drove her mad.

If there is some one who has aught against you, go at once, and be reconciled. If you have aught against any one, write to them a letter, telling them that you forgive them, and so have this thing off your conscience. I remember being in the inquiry-room some years ago; I was in one corner of the room, talking to a young lady. There seemed to be something in the way, but I could not find out what it was. At last I said, “Is there not some one you do not forgive?” She looked up at me, and said, “What made you ask that? Has anyone told you about me?” “No,” I said; “but I thought perhaps that might be the case, as you have not received forgiveness yourself.” “Well,” she said, pointing to another corner of the room, where there was a young lady sitting, “I have had trouble with that young lady; we have not spoken to each other for along time.” “Oh,” I said, “it is all plain to me now; you cannot be forgiven until you are willing to forgive her.” It was a great struggle. But then you know, the greater the cross the greater the blessing. It is human to err, but it is Christ-like to forgive and be forgiven. At last this young lady said: ‘I will go and forgive her.” Strange to say, the same conflict was going on in the mind of the lady in the other part of the room. They both came to their right mind about the same time. They met each other in the middle of the floor. The one tried to say that she forgave the other, but they could not finish; so they rushed into each other’s arms. Then the four of us— the two seekers and the two workers—got down on our knees together, and we had a grand meeting. These two went away rejoicing.