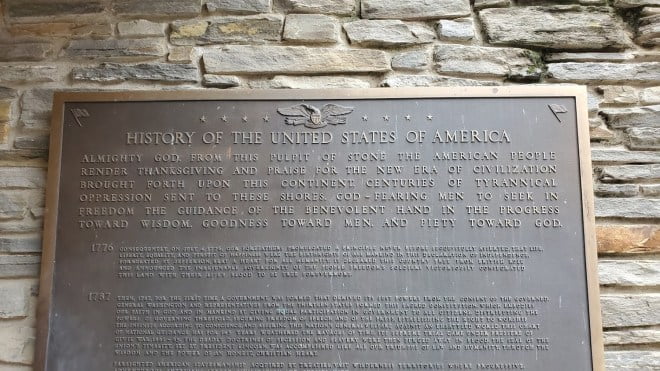 A few days ago, we looked at President Lincoln’s call for fasting and prayer. Other periods of American history were not overshadowed by crisis. Yet even in these times people recognized the need for thanksgiving.

Some people know that the sculptor of Mount Rushmore was Gutzon Borglum.

Most people don’t know that Gutzon Borglum called for a short history of the United States to be carved into stone at Mount Rushmore as well.

President Franklin Delano Roosevelt was the chairman of the Inscription Committee. An inscription was chosen – but the insufferable Borglum was unable to accept anyone’s art (or literature) as equal to his own. It wasn’t until thirty years after Borglum died that the history was installed at Mount Rushmore.

Before these words are sand-blasted off by revisionist historians, I grabbed a photograph of this amazing history:

Almighty God, from this pulpit of stone the American people render thanksgiving and praise for the new era of civilization brought forth upon this continent. Centuries of tyrannical oppression sent to these shores, God-fearing men to seek in freedom the guidance of the benevolent hand in the progress toward wisdom, goodness toward men, and piety toward God.

Even though this was penned near the bottom of the Great Depression, notice the closing words:

Holding no fear of the economic and political chaotic clouds hovering over the earth, the consecrated Americans dedicate this nation before God, to exalt righteousness and to maintain mankind’s constituted liberties so long as the earth shall endure.

Mr. Burkett recognized a responsiblity that was uttered 3,000 years earlier by Solomon:

Righteousness exalteth a nation: but sin is a reproach to any people.