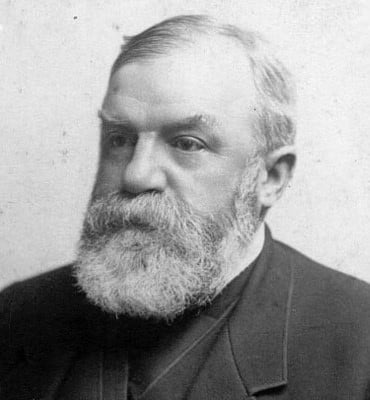 If you were to go to Boston today, you would find a plaque on the outside of a former shoe store, now a bank, which reads, “Christian evangelist, friend of man, founder of the Northfield Schools, was converted to God in a shoe store on this site April 21, 1855.”

D.L. Moody was working as a shoe store salesman when his Sunday school teacher came in, shared the gospel with him, and he was converted.

In 1858, he went as a traveling shoe salesman to Chicago, where he began a Sunday school for poor inner-city and immigrant kids.

He said, “It is a masterpiece of the Devil to make us believe that children cannot understand religion. Would Christ have made a child the standard of faith if He had known that it was not capable of understanding His words?”

One day, a man named William Reynolds visited the Sunday school and wrote the following about the experience:

“The first meeting I ever saw him at was in a little old shanty that had been abandoned by a saloon keeper. Mr. Moody had got the place to hold the meetings in at night. I went there a little late and the first thing I saw was a man standing up with a few tallow candles around him, holding a boy, and trying to read to him the story of the Prodigal Son. A great many words he could not read out and had to skip. I thought, ‘If the Lord can ever use such an instrument as that for His honor and glory, it will astonish me.’ After that meeting was over, Mr. Moody said to me, ‘Reynolds, I have got only one talent: I have no education, but I love the Lord Jesus Christ and I want to do something for Him. I want you to pray for me.’”

Another person to visit the Sunday school class was Abraham Lincoln, after he was elected president and his train was going through Chicago on the way to DC.

Catch the rest of this interview with Bill Federer on America’s Christian Heritage on VCY.tv