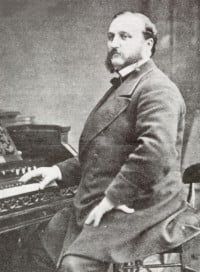 Ira David Sankey was born in Edinburg, Pennsylvania, on August 28, 1840, to David and Mary Sankey. He was one of nine children and had four brothers and four sisters.

In his own way, his father was rather famous. He was a state senator, a member of the House of Representatives, the president of the First Bank of New Castle, and was part of the IRS.

When Sankey was sixteen, he attended a revival at a church known as “King’s Chapel” and was converted.

One year later, in 1857, he and his family moved to New Castle, Pennsylvania, where they became members of a local church. Because of his interest in music and so forth, he was immediately recognized as a person who could take over both the Sunday school and the church choir, which he did for several years.

In 1861, he enrolled as a soldier in the Civil War and often led singing for the religious services held in the camp. After he returned to Pennsylvania, he took up employment with his father and worked for the IRS for several years.

On September 9, 1863, he married Francis Edwards, the daughter of a state senator and a member of his choir.

In 1867, a branch of the YMCA formed a new council and he was elected as the secretary and, later, as the president.

Three years later, he was also appointed as a delegate to the International Convention of the YMCA in Indianapolis. This was the turning point for his career because, at that point, he had not been associated with D. L. Moody.

While attending the convention, there was a lack of enthusiasm in the singing and one of the other delegates told him, “You can sing. Why don’t you stir this crowd up and sing something?” Apparently, he did! Afterward, he was introduced to D. L. Moody, who had approached Sankey and went on to ask him to give up his career and join him in Chicago to help in his Christian work.

This meant Sankey would have to give up a pretty good salary with the IRS to go to an uncertain future and he was hesitant at first. It took six months before he went to Chicago to test the waters and spend a week with Moody and his Christian work.

In early 1871, He began to work with Moody. It was a good relationship where Moody preached, he sang, and, together, they really roused the crowd!

Sadly, that October, the Great Chicago fire destroyed Moody’s house, church, and pretty much everything that he owned.

In the aftermath, Sankey returned to Pennsylvania.

Shortly after, Moody contacted him and wanted him to come back to the temporary setup in Chicago, which he did.

From 1873-1875, Moody and Sankey took their first ministry trip together to England, Scotland, and Ireland.

While traveling from Glasgow to Edinburgh, Sankey picked up a newspaper that had a poem in it, “The Ninety and Nine,” which was written by Elizabeth Clephane.

He wrote, “So impressed was I that I called Mr. Moody’s attention to it, and he asked me to read it to him. This I proceeded to do with all the vim and energy at my command. After I had finished, I looked at my friend Moody to see what the effect had been, only to discover that he had not heard a word, so absorbed was he in a letter which he had received from Chicago. My chagrin can be better imagined than described. Notwithstanding this experience, I cut out the poem and placed it in my musical scrap-book…” (Sankey, Ira D. My Life and the Story of the Gospel Hymns. Philadelphia: The Sunday School Times Company, 1907.)

The next day, after Moody’s preaching on “The Good Shepherd,” he asked Sankey to sing a solo that would fit with the theme.

“At this moment, I seemed to hear a voice saying: “Sing the hymn you found on the train!” But I thought this impossible, as no music had ever been written for that hymn. Again, the impression came strongly upon me that I must sing the beautiful and appropriate words I had found the day before, and placing the little newspaper slip on the organ in front of me, I lifted my heart in prayer, asking God to help me so to sing that the people might hear and understand. Laying my hands upon the organ I struck the key of A flat, and began to sing.

“Note by note the tune was given, which has not been changed from that day to this. As the singing ceased, a great sigh seemed to go up from the meeting, and I knew that the song had reached the hearts of my Scotch audience. Mr. Moody was greatly moved. Leaving the pulpit, he came down to where I was seated. Leaning over the organ, he looked at the little newspaper slip from which the song had been sung, and with tears in his eyes said: ‘Sankey, where did you get that hymn? I never heard the like of it in my life.’ I was also moved to tears and arose and replied: ‘Mr. Moody, that’s the hymn I read to you yesterday on the train, which you did not hear’… Thus, ‘The Ninety and Nine’ was born.” (Sankey, Ira D. My Life and the Story of the Gospel Hymns. Philadelphia: The Sunday School Times Company, 1907.)

Catch the rest of this interview with Ed Petrus on Ira Sankey and His Songs on VCY.tv