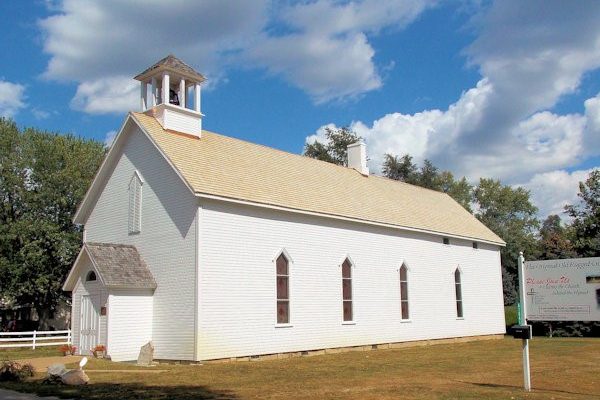 In 1862, The Old Rugged Cross Church in Dowagiac, Michigan, was originally built as a hops barn, where they stored and dried hops for making beer.

In the 1870s, a group of locals, who had been meeting in each other’s homes for church, bought the old barn and turned it into a church.

They worshiped there for thirty-nine years and, towards the end of that period, the pastor invited his good friend, George Bennard, to come and help him with a series of revivals.

When George Bennard came, he brought the hymn that he was currently writing with him, finished it, and introduced it at the revival. The name of that hymn was “The Old Rugged Cross.”

George Bennard was born on February 4, 1873, in Youngstown, Ohio.

He loved writing hymns and it’s estimated that he wrote over three hundred of them.

When he first started writing “The Old Rugged Cross,” he only got the first line out before getting stymied on it and not being able to go on any further. He had an experience, though, while leading a revival, which enabled him to continue writing the hymn…

At the end of this particular revival, some teenagers came forward and he was thrilled that he had converted them! However, when they got up to the front of the tent, where the revival had been held, they started ridiculing him and making fun of him instead. This devastated him.

He said he felt, at that time, like Christ must have felt when he was going through the streets of Jerusalem being spat upon, beaten, and mistreated so horribly.

He could relate to what Christ had gone through so he started going through the Bible looking for any and every reference to the cross. This is when the words to “The Old Rugged Cross” started to flow and he was able to continue writing the hymn.

Catch the rest of this interview with Bob and Molly Schaefer on The Old Rugged Cross Church on VCY.tv