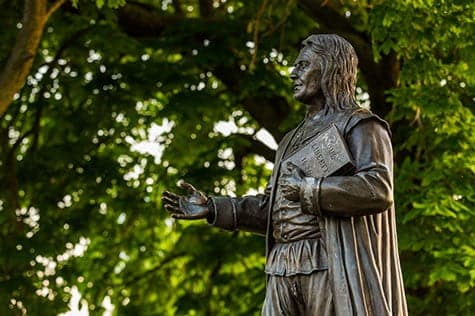 Roger Williams was born into an Anglican family in London, England, in about 1603 and became a Christian when he was about ten or twelve years old.

He became a very serious young person and even taught himself shorthand, primarily so that, when he attended Puritan sermons, he could take down copious notes and study the sermon later.

He came to the attention of one of the leading jurists in England, Sir Edward Coke, a man who was influential in the king’s court and was a major player in the politics of the day.

Somehow, Coke noticed Williams, discovered that he was adept at shorthand, and hired him to work in his law office.

In this capacity, Williams almost certainly attended heresy trials because, by this time, the Puritans were coming into considerable disfavor with the royals due to their desire to cleanse the Anglican church of all its nominal Christianity and establish heartfelt religion.

Thus, most of his biographers say that, when he first emerged as an adult, thinking for himself, he had a strong aversion to political actions against people for their religious opinions.

Through the influence of Coke, he was sent to Cambridge University. Someone in his station of life wouldn’t normally be able to get into Cambridge, but Coke was a powerful advocate.

After Williams completed his BA degree, he entered into a MA program, which was designed to prepare him for ordination and for service in the Anglican church.

Already, though, he had significant misgivings about serving in the Anglican establishment and looked at the requirements of pastors in the Anglican church as kind of playing the political game to make sure they stayed on the right side of the wealthy and the nobility.

Consequently, because he decided he didn’t want to be a part of that game and because he was becoming a decided Puritan in his thinking, he withdrew from the MA program, although he was still able to achieve ordination.

In 1629, he married Mary Barnard, a godly woman who was the daughter of a Puritan minister.

Between 1629-1639, the Puritans, wanting to escape the oppression of the Anglican state church, organized a migration out of England.

At this time, Williams was moving even beyond Puritanism, toward Separatism. Had he told the Puritans, they probably would not have invited him to go with them to Massachusetts Bay.

At this time, being a Separatist was also dangerous and could get a person banished from the country or even executed.

In December, 1630, Roger and Mary Williams set sail on the second ship of the Great Puritan Migration and in February, 1631, landed in New England.

When they arrived, Williams was offered an outstanding opportunity to be the teacher (assistant pastor) of the Church of Boston. However, by this time, he had seen that, when you marry state and church, this always produces nominal Christians so he refused and withdrew to the Separatists in Plymouth.

While there, they took him on as a teacher (assistant pastor) for the next two years and he came in close contact with a group of people that the Puritans and Separatists talked about a lot, but didn’t spend much attention evangelizing – the Native Americans.

He began evangelizing their tribes and learning their languages, something almost no one was doing. Other Puritans would go on to do the same, but he was the first.

He was also the first to master the Native American languages sufficiently enough that he wrote a book which was published in the colonies, A Key into the Language of America, in which he translated portions of the Scriptures into the Algonquian language that the Narragansett and Wampanoag spoke.

Catch the rest of this interview with Dr. David Saxon on Roger Williams on VCY.tv