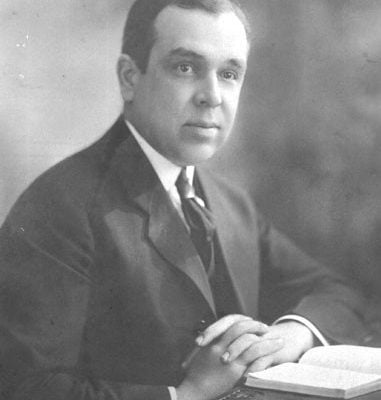 John Gresham Machen was born into a prominent family on July 28, 1881, in Baltimore, Maryland.

His father was an attorney and his mother was a housewife and social lady. She was probably his closest friend throughout his whole life, as he never married, and the two of them exchanged thousands of letters over the years.

His own spiritual journey was rather slow developing. While studying in Europe, he sat under some theological liberal scholars and, as he listened to them, found something very fresh and engaging.

He came to realize, though, that this liberal theology was very dangerous and was actually producing kind of a counterfeit version of Christianity.

Out of this came his conviction that a person shouldn’t just close his eyes to things he disagrees with, but should seek to understand them, evaluate them, and then make a decision based on his study and evaluation. This is exactly what he did with this theological liberalism.

His evaluation ended up producing a book, Christianity and Liberalism, where he argued that liberal theology is actually a whole different kind of religion, not redemptive, doesn’t offer any solution to the problem of sin, and just tells people to be good people and to follow good examples. It’s an attack on the core, essential doctrines of the Christian faith.

Machen was among the very few who were willing to stand up and, in a very scholarly way, refute the false teachings that were coming through modernism of his day.

In 1906, he began teaching at Princeton Theological Seminary and, while there, was instrumental in the fight against liberalism.

His colleagues could see that he had great ability, was a diamond in the rough, and was destined for great things.

Machen didn’t have an overinflated opinion of himself or his gifts, however, which was one thing that made him so useful. He was a very humble man and a very strong, faithful defender of the faith.

Catch the rest of this interview with Brian De Jonge on J. Gresham Machen on VCY.tv